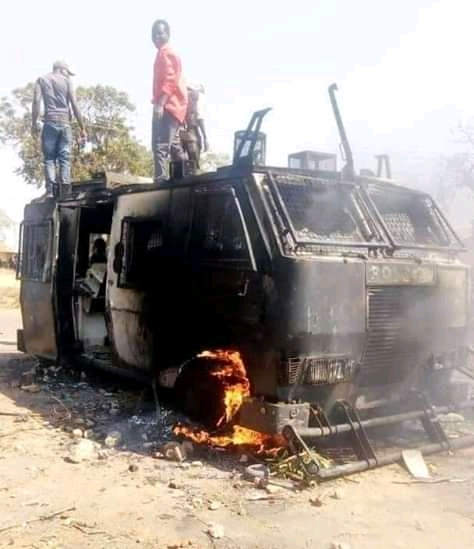 3 people have been injured and 18 vehicles smashed by irate protesters at Madisi, Dowa after their demands to release a man accused of blood sucking were denied.

On March 27, 2020 people at Kamango Village, Traditional Authority Chakhadza in Dowa arrested Aubrey Phiri 37, on suspicion that he was in the area for the alleged blood sucking mission.

“Following his apprehension, he was taken to Madisi Police Unit for further questioning and investigations,”

“But this did not go well with some residents who stormed the police unit protesting and demanding for his release baying for his blood,” Lubrino said.

He added that police transferred the suspect to Mponela Police Station, a thing which annoyed them.

“Later, they mobilized and started burning tyres and pelting stones on vehicles using the M1 road,”

“Three people were injured in process and were rushed to Mponela Rural Hospital,” he said.

According to Lubrino eighteen vehicles for different individuals including for some organizations were also damaged.

Meanwhile the police have launched investigations to arrest the perpetrators of the violence.

The police would like to call upon all citizens in the country and Dowa in particular to report all criminal activities for proper investigations and prosecution.

Furthermore, the police condemn acts of violence and use of self administration of justice as a violation to fair trial.