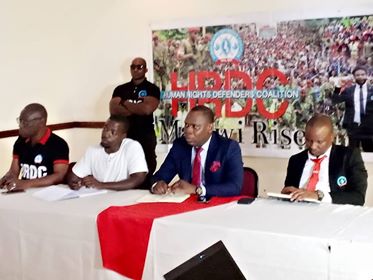 Speaking during a press briefing on 2nd June, 2020, HRDC Chairperson Gift Trapence said it is not appropriate for the president to use such kind of words in public.

HRDC chairperson said they are not giving him number of days to apologise.

“As HRDC we want our women to be respected, we want our girls to be respected and if it is the issue of politics it should be on issue based not castigating each other and not dimining the dignity of our women in Malawi and as a country we have very good laws that are promoting, protecting the rights of women in this country”,said Trapence.

Trapence also noted that the Coalition is calling upon UN women to remove president Peter Muntharika from the position of championing #HeforShe campaign.

“As HRDC we are calling the UN women to remove President Muntharika the position he was given to represent the face of men who are against the oppression of women in the world as well as in Malawi. We can not have a leader who can be in forefront castigating women as a leader who is an ambassador for #HeforShe campaign. I think he should be the first to cast that stone and that is why we are saying that in the first place he has to apologise and as well the UN should take off his position because he is not exemplary enough to hold that position”,said Trapence.

President Muntharika on 1st June, 2020 during a political rally in Thyolo, he attacked Former President Dr Joyce Banda saying she is a prostitute and this attack has dissapointed many people including NGO’s that fight for women’s rights.

APM was responding to the allegations that were made by Joyce Banda at a rally at Njamba Freedom Park in the past days saying APM is a drunkard.