Arsenal young midfielder, Denilson Pereira has expressed his gratitude to his Coach Arsene Wenger saying the manager’s faith is now paying off.

The Brazilian told club’s official website, arsenal.com after his side dismantled Sporting Braga 6-0 in their first Champions League campaign at Emirates Stadium on Wednesday night.

For a long time Wenger has been accused of not buying experienced players but the Brazillian says Wednesday night’s performance showed how Wenger’s orchestra important they are.

“Tonight was a very nice night for Arsenal and I am proud of the team,” said the midfielder. “Arsène Wenger believes in us and if we keep playing together we have a chance to win something because we need a trophy this season.

“The manager’s faith is paying off. For a long time we did not win a trophy and it is normal then that people say that Arsène Wenger has to buy experienced players. But you saw tonight that the youngest players showed how important they are to the group.

The 22 year old Arsenal star further went to say that he is now fully fit to play and he believes his dream of making into national team will come true.

“I hope I can play for Brazil,” he said. “I was injured five months ago but now I am fit to play. I want to go to the national team because it is my dream. I want to help Arsenal first and after that Brazil. There are friendlies coming up and I hope to be in the squad.”

Arsenal is the first team to score more goals in this year’s Champions League first campaign despite Barcelona’s 5-1 thrashing over Panathinaikos on Tuesday night. 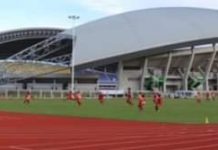