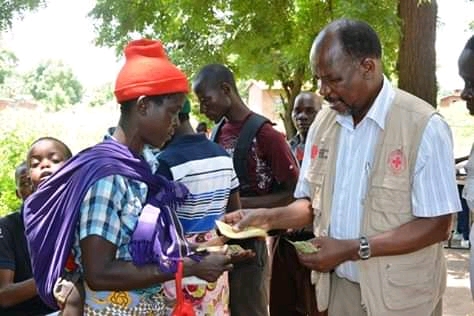 Malawi Red Cross Society (MRCS) has given an assistance in form of cash amounting to 16 Million Malawi Kwacha to floods victims in Nsanje district on 20th February,2020.

Kanongodza thanked the Flanders Government and the Belgian Red Cross for the timely humanitarian assistance provided through crisis modifier under the Reducing the impact of Climate Risks in Southern Africa through Disaster Risk Reduction project implemented in Chikwawa, Nsanje and Zomba.

Ellen Maibeki from Mailosi village Traditional Authority Mlolo said she had no hope after her house completely collapsed due to the floods.

“I didn’t expect to receive this money today. This money will enable me reconstruct my house,” he said.

370 households that were rendered destitute by floods, which hit the areas of Traditional Authority Mlolo and Ndamela in Nsanje district, 276 households in Chikwawa, and 322 households in Zomba have received cash assistance totaling to 36 Million Malawi Kwacha.

Kanongodza said MRCS is this year prepared to respond to any disaster. He however advised people to move away from the lower ground and relocate to the higher ground where they cannot be affected by the floods.