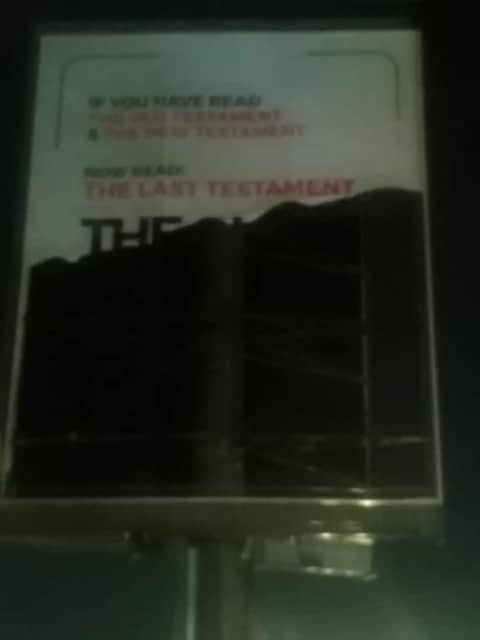 There has been a wave of disapproval of a billboard posted by an Islamic propagation organisation, the Islamic Information Bureau.

Apparently, barely had a complaint on the contents been raised than some elements moved in to discrete the billboard.

In this write up, I will attempt to describe why, as Muslims, we were entitled to the billboard and how those responsible for the destruction of the “controversial billboard” have engaged in an act of provocation.

What has been raised as a matter of “great injustice” in the argument I have heard so far is that Muslims have demeaned the Christian scriptures by making reference to the Old and New Testaments, and describing the Qur’an as the “Ultimate” Testament.

If the concerned clergy had cared to sit back, reflect and engage those in the Muslim community, the matter would have been addressed without drawing so much attention.

From my understanding, the use of the word “Ultimate” is drawn from numerous sources and two immediately come to mind. First, the concept of “khatam nabiin” an Arabic phrase translated as “Seal of Prophethood”. This teaching asserts Prophet Muhammad was the “seal” or the final of all Prophets of God. Secondly, the Qur’an says it was brought “as the final testament to humanity”. This, again, suggests it was the “Ultimate Testament”.

It is, therefore, my considered view that while it regrettably seem to provoke others, the use of “Ultimate” has solid foundations in the scriptures of the Muslims.

Again, what someone believes in doesn’t have to be correct measured on someone’s belief. Doing so would be imposing one’s beliefs to the general population.

The bottom line is that religious teachings are divergent. Islam and Christianity, bluntly put, are water and oil. But our oneness as a people should not be allowed to think of our own beliefs as worthy of professing and not those of others.

For example, by professing the doctrine of the Trinity (the teaching about God the father, God the Son and God the Holy Spirit) Christians contradict the Muslim stand on Oneness of God. While Muslims regard Jesus as a Prophet, Muhammad is not recognized in Christianity.

These two extremes can never be harmonised unless we agree to disagree. We should all be aware that our beliefs are different – opposite.

Put bluntly, don’t expect me to blame Christians for calling Jesus “God”. In as much as I find myself at risk of committing blasphemy based on the teachings of Islam, I have to respect that its their belief.

Likewise, let the Christian friends understand me when I call the Qur’an the Ultimate or final Testament.

Because it isn’t the final Testament to the Christian faithful should not take away the right to describe it as such from me.

Doing so is a violation of my freedoms granted by the Constitution. It basically forces me to abandon my beliefs in favour of those of my critics.

At worst, the view that this billboard is provocative is an attempt to monopolise spiritual correctness.

Being an Abrahamic faith, Islam has proprietary claim to all scriptures handed down to earlier Prophets all the way to Muhammad, who is not recognized by Christians, and other faith groups.

I feel depriving Muslims of the right to call the Qur’an an Ultimate Testament or a “miracle” is an underserved provocation to our Constitution and the freedoms it grants.

Granted this, God forbid, is accepted, what about religious songs that caution non-believers of a particular belief system as hell-bound? Will these songs be taken off the air? I know of many Islamic and Christian songs that would fit as outright candidates into the ban list!

The billboard issue is about agreeing to disagree. It was not intended to inflict malice. To pull down the billboard would be an attempt to invite people to become extremists – a trait that doesn’t work in a multi-religious setting like ours.