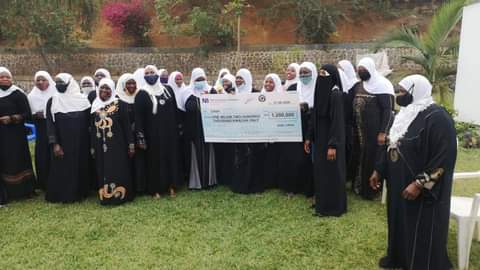 Recently , Lipipa handed over a MK 1,200,000 Cheque to Muslim Women Association of Blantyre City South Constituency to boost their capital with no interest in line with the Muslim faith.

Reacting to the gesture , Muslims in the country have hailed Lipipa for the initiative which has no interest.

“It is a good gesture because Islam teaches us not to add interest when getting a loan. The MP has done a great job and others should emulate,” Abdul Rashid Seleman told Malawi Muslim Website.

According to Seleman, the gesture of interest free loans should be a culture across the country to allow Muslim women get loans to empower themselves.

According to Lipipa, village banking may not be a complex financial concept, but it is making a difference in the lives of countless women and their families in his constituency.

“It is a modest idea whereby members gather each month and literally put their money on the table, which then becomes immediately available to members as loans.
The practice eliminates bank fees, waiting periods for loan approval and many other obstacles faced by women in Malawi who need loans but lack collateral,”

“The loans are used to start revenue-generating projects. The loans will be paid back at no interest in conformity with the Muslim faith,” Lipipa said.

Lipipa said he is committed to empowering women to rise up because he knows a woman is a complete circle.

“Within her is the power to create, nurture and transform,” Lipipa said.