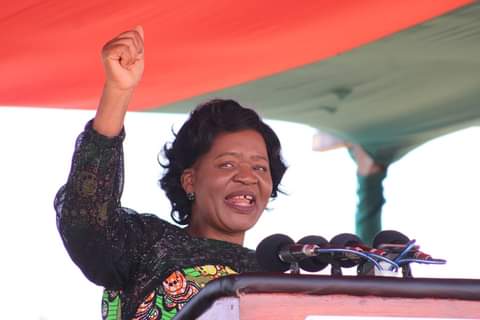 It is obvious that most rural girls fail to excel in life because of lack of opportunities that are mostly attained through high quality education.

In most rural areas of Malawi, most girls fail to complete the primary cycle of education because of many factors such as poverty, lack of role models or bad cultural practices that force them to be married off or impregnated.

It is vital to appreciate the step taken by the First Lady of the Republic of Malawi , Monica Chakwera to make sure that underprivileged girls in rural areas are empowered to realise their academic dreams.

Madam Chakwera has launched a charitable organization called Shaping Our Future Foundation (SOFF) mainly focusing on improving the lives of rural underprivileged girls and women. It is very important to actualise the aims of the organization as most organisations in the country end up enriching the founders only.

I am very certain that SOFF will fully serve it’s purpose as the First Lady out of politics is known to be a kind-hearted woman who is always angry to uplift other people’s lives. I am sure that he won’t change the colors because at the moment she is into active politics.

Most girls in rural Malawia such as in Nkhotakota district where Malawi Muslim Website has conducted a snap survey drop out of schools due to lack of role models and poverty. The girls whom most of them are aged between 12-18 say they have never seen any woman from the villages of Nkhandwe, Thandaza, Kapanga, Mbalame, Chinziri and Ntwana, Sub- Traditional Authority Kalimanjira realising their dreams through education. They say they always see women hit hard by poverty.

“I was keen to work hard at school but I have never seen any woman from this area who prospered through education. when I was in Standard 7, I was impregnated and later married off,” one girl who dropped out of school told Malawi Muslim Website.

Chief Ntwana told Malawi Muslim Website that it is really sad that most primary school going students in her are either impregnated or married off.

“It’s true that we have no women who went further with education in the area and this act as a barrier since these children lack role models. It is our duty to change the story by encouraging these girls to work hard at school and become role models of others,” she told Malawi Muslim Website.

I am sure that there are many girls in the country who dropped out of school in rural Malawi because they think education is of no use because they have never seen fellow women in their areas who broke the walls of poverty through education.

It is my prayer that SOFF has policies in its framework aimed at civic educating the rural girls on the importance of education and develop policies to make them (rural girls) fall in love with education.