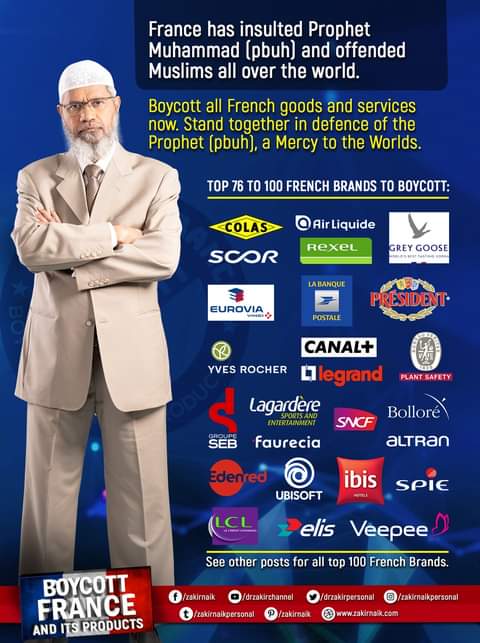 Muslim in the country have joined Muslims across the globe to boycott french products over cartoons depicting the image of Prophet Muhammad.

A French satirical magazine Charlie Hebdo republished caricatures of the Prophet Muhammad in early September, that triggered a chain of events that included two stabbings, protests in Muslim nations, the boycott of French goods and criticism from allies.

The cartoons depicting the Prophet’s image was later supported by France President Emmanuel Macron that increased anger among Muslims that Muslim community in the country to join the boycott french products campaign.

“France has insulted Prophet Muhammad (pbuh) and offended Muslims all over the world,”

“Boycott all French goods and services now. Stand together in defence of the Prophet (pbuh), a Mercy to the Worlds. Top 76–100 French Brands to Boycott: See other posts for all top 100 French Brands,” Dr Zakir said on his Facebook page.

Muslims in the country have also joined Muslims in world in the campaign.