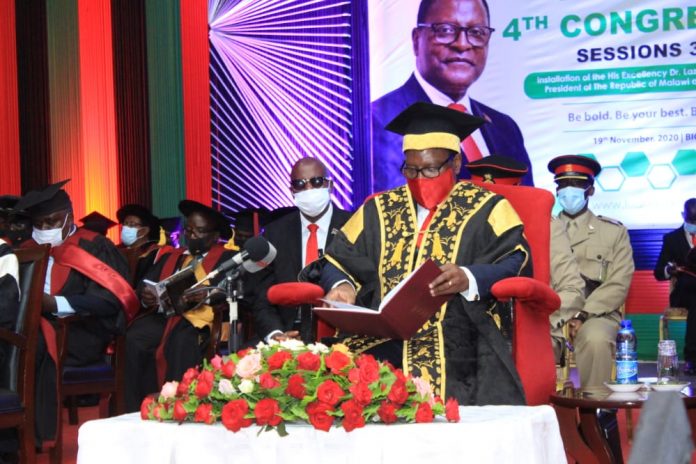 President Dr. Lazarus Chakwera on Thursday accepted an honour to be installed as the Chancellor of the Lilongwe University of Agriculture and Natural Resources [LUANAR],a development that has seemed contradiction to his past remarks against anachronistic notion of having the Head of State serve as Chancellor of all the public universities.

President Dr. Chakwera said his remarks calling for a review of this practice were a statement of intent, saying it is his expectation that the Minister of Education is developing a harmonized Universities Act to repeal and replace the current Acts as a way of rectifying this anomaly.

Dr. Chakwera said until that is done, he is duty bound to comply with the laws presently in force including the LUANAR Act No 9 of 2011 which bestows the title upon his office, while this tradition prevails.

Speaking in Lilongwe at the graduation ceremony for LUANAR, President Dr. Chakwera said as the developed world races towards the invention of a viable vaccine against Covid -19, it is clear that the time has come for Malawi to also start making sure that their education system is one that produces a new kind of student.

Dr. Chakwera said Malawi can no longer afford to have colleges that focus on solving problems that no longer exist, or merely solving those problems in existence today, saying it must produce a new kind of student capable of anticipating tomorrow’s problems and coming up with innovative solutions to those solutions ahead of time.

He quoted Henry Newman who said “a University is a place where Inquiry is pushed forward, discoveries verified, and perfected, and error exposed, by the collision of mind with mind, and knowledge with knowledge,”saying this forward pushing inquiry is the foundation of all human progress, the birthplace of development, and the well spring of improvement, there is no human invention that cannot be improved.

The President then, challenged students that are graduating today to look ahead to the problems of tomorrow and make themselves relevant by curating solutions to them ahead of time saying as experts in various aspects of managing the country’s agricultural resources, they are right to have high expectations of them to make their contribution to ending the cycle of hunger that has ravaged this country for decades.

“It is no value to earn a distinction or doctorate in food production if it does not result in food production, pleased to note that LUANAR has reviewed its curricula to ensure that all programmes offered, have elements of entrepreneurship,” said Dr. Chakwera.

He said he was happy to learn that LUANAR has engaged Press Agriculture to explore how best to utilize the estates that have been lying idle in the wake of drops in tobacco production, saying initiatives like these,bring the university and Government together to reinvigorate the Agriculture Sector.