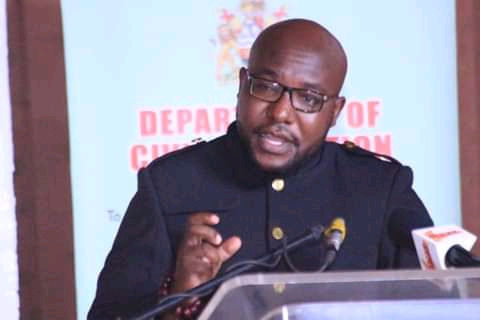 Minister of Civic Education and National Unity Honourable Timothy Mtambo has appealed to people in the country to transform national values towards reconciliation and unity.

Mtambo was speaking this during a public Lecture at Malawi Assemblies of God University (MAGU) on 8th December, 2020 in Lilongwe.

During the Public Lecture Mtambo emphasized much on the issue to do with National Values and discpline, he said there is need for people in the country to maintain discipline in anything we do and transform our values.

“As A country we need to have a collective values which we can all adhere to, you know when you see lawlessness, indiscipline, criminality in the society it means there is a breakdown of values. As a country we do not have a collective values, our government must have values, our country has lost discpline when you see the rooting in the civil service it is a result of lack of values because if we are discpline we couldn’t be rooting from our country.

Mtambo also noted about reconciliation saying as a country there is need to reconcile because reconciliation is very important to the development of the country.

“You know a divided country in which people have got wounds can not move forward, we have a lot of wounds which have not be healed in this country because accountability has never taken place. So we think Malawi is disentergrated because we have missed a very important step, we are sitting on a time bomb some people have done a lot of wrong things but they are walking free in towns, some people have lost their loved ones up to date they don’t know how and why and what happened. So reconciliation is very important to heal the Nation and a healed and United country will move with a common purpose”,said Mtambo.

He then added that going forward as a country we should expect a continued debate and engagement on the issues of national unity and transformative values.

“As a Ministry we are going to engage various stakeholders this is just a begining we are going to different Universities to engage the students because we would want to engage young people more they should understand why we want to do this and we are also going to make sure that we came up up with a committee that is going to make this dialogue in community levels because the values that we are going to produce eventually they are Malawian values and we want them to be protected by policy legal framework so that they are embraced as a collective values for Malawi”,said Mtambo.

The Public Lecture was organised by Malawi Assemblies of God University ( MAGU) in partnership with the Ministry of Civic Education and National Unity and the theme of the public lecture was “Transformative National Values Towards National Reconciliation and Unity”.