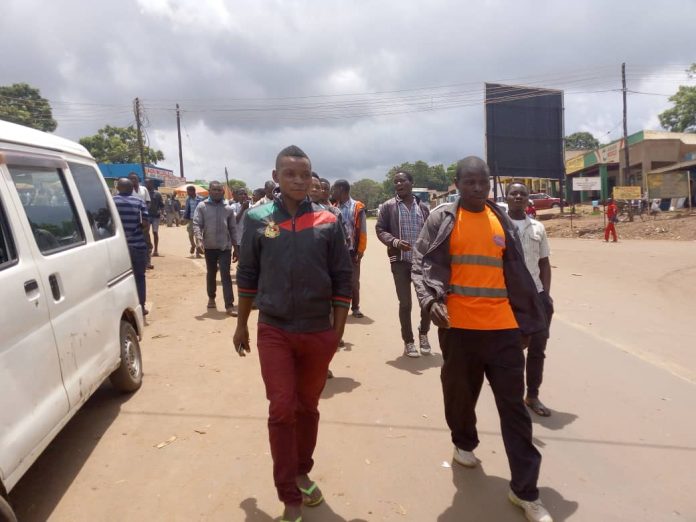 Dowa is not the only district where motorcycles have conducted demonstration protests against the confiscation of their bikes, in the capital, Lilongwe at one time, business was brought to a standstill as all Kabaza operators were in the streets closing the M1 Blantyre –Mzuzu road from the Lilongwe Community Centre ground to Lilongwe police station.

Traffic police officers confiscated about 7 motorcycles and this angered the operators who mobilized themselves joined by other concerned people marching to Dowa police station demanding their bikes back as government has failed to provide them with MEDF Loans and the much anticipated one million jobs has not been fulfilled to this day.

One of the motorcycle operator’s, Lobodo Harrison, said police only confiscated their bikes without giving them the valid reasons for confiscation saying this will make the Tonse government followers and supporters starts withdrawing the support they gave to it to win the Fresh Presidential polls by a majority win.

Harrison said Dowa is a bedroom of the MCP and they did not expect that their government can treat them as foreigners, they have families and survive on hand to mouth every day, all cannot go to town and they chose to give themselves something, Kabaza operators to earn a living, but government is taking away their living to turn them unemployed.

“If government is confiscating our bikes which gives us the daily bread, it should give us employment, this is killing us and had we known that after voting this government that they will treat us like this, I could not have voted for it, we voted for wrong people in government because they do not understand our problems,” lamented Harrison.

He said due to confiscation of the bikes, transport costs have gone up because they were charging a reasonable amount of K2,000 to Nalunga and K3,000 to Matakenya, but all this has been stopped so that they all have to board vehicles to their various destinations, questioning the Tonse where is Malawi wokomera wonse it has been preaching in enticing the voters to vote for it.

Meanwhile, Muvi wa Chilungamo has asked the Tonse Alliance government to reverse the decision of confiscating motorcycles saying this is fueling anger on another anger of unfulfilled campaign promises Malawians are anxiously waiting from their government.

Its Commander in Chief, Bantu Saunders Jumah, has faulted the timing to start confiscating the motorcycles as not done in the interest of the Kabaza operators saying government has to give them a notice of about 3 months for them to start preparations other than coming all suddenly to confiscate the bikes.

“Give them ample time to prepare, they are your votes and in 2025 you will need the same people that are being taken as useless. Make sure you charge them reasonably for licenses so that all will be able to pay, overcharging them will take this government to nowhere,” said Jumah.

Jumah is also appealing to those surrounding President Dr. Chakwera and his Vice, Dr. Chilima to advise them in good faith that Malawians are angry at their government which they voted to end decades of their sufferings, but this public trust has gone away looking at the past 6 months of Tonse in government that it has failed to live up to its promises.

He warned that if these demonstration protests are to be carried over to 2021, government will find a tough ride to convince its citizens that the country is going on the right track, advising President Dr. Chakwera and Dr. Chilima to listen to the peoples’ demands for Malawi Wokomera Tonse.