Muslim Association of Malawi (MAM) told the Blantyre City Council (BCC) to bring back the billboard that was aimed at promoting the Holy Qur’an.

Speaking during a press briefing yesterday at Malawi Sun Hotel in Blantyre, MAM Publicity Secretary Sheikh Dinala said BCC was wrong to remove the billboard which had no any offensive language but rather encouraging Malawians to read the Holy Qur’an.

Sheikh Chabulika has therefore asked Muslims in the country to be patient on the matter.

“We know that out there, there are concerns as to why Blantyre City Council destroyed our billboard. It is our responsibility as leaders to talk to our people to calm them down and to make sure that if there are some disagreement they should be solved amicably,” Chabulika said.

Sheikh Chabulika said Muslims believe in all books of God and all Prophets.

“We as Muslims believe in Jesus. We believe in Old tastament, in New testament and in the Last testament, the Holy Quran,” he said.

According to Sheikh Chabulika, for centuries, Muslims and Christians have enjoyed peaceful co-existence in this country and he looks forward to the continued harmony in a Multi-religious environment where people freely profess their faith.

In a statement which has been signed by MAM Secretary General, Alhaj Twaibu Lawe, MAM says.

“We will be engaging Blantyre City Council and law enforcement agencies, firstly for them to investigate and apprehend the culprits who damaged our billboard, and secondly to work with them on the process of immediately replacing the damaged billboard”.

Chienda Added to say ” we are disheartened to see Blantyre City Council removed the billboard without our consent and they didn’t ask us on what the billboard was all about”.

According to Chiyenda IIB spent a lot of money on the billboard. 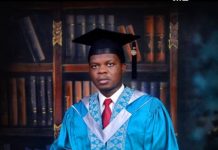