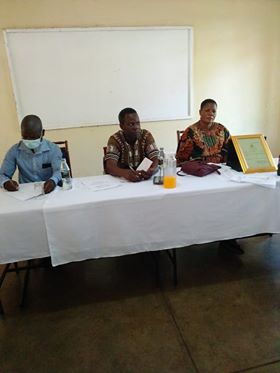 Kandiyesa and Mtsinje says Rev. Somanje took Bwalo la Chewa from underground movement of darkness to the open for its registration as a Chewa heritage and launch as the voice of all the Chewas in Malawi.

The two asked Rev. Somanje that although he has delegated his duties to the National Governing Council( NGC), he should be part of the grouping working hand in hand with the committee to ensure that the grouping not fall down but continuing achieving its objectives.

In his acceptance speech during an orientation training held at the Dowa boma, Kandiyesa, called upon all the Chewas in Malawi to support the grouping morally, socially, financially and physically in order to achieve its objective of promoting and preserving the aspirations of the Chewa culture in Malawi.

Kandiyesa called for unity and tolerance with other existing tribal groupings on the land saying Malawi is one country regardless of different political parties one is affiliated to.

“Let us live in peace, love and harmony with other tribes within and surrounding us. We can differ in politics, politics can come and go, but in culture and traditions, we are one, one Malawi, one nation,”said Kandiyesa.

On her part, Tamara Mtsinje said an educative nation will depend on how women are treated in their own society for them to deliver just the same as men, thanking men who thinks of women first, in decision making positions and policies to deliver if given chance.

Mtsinje said she has learnt a lot from Rev. Somanje assuring the Chewas in Malawi not to underrate her that she is a woman but supporting her not to fail in ensuring that the grouping reaches out to every Chewa in Malawi that they have one voice.

“Don’t always think that women are good at motherly duties, this is Malawi of today, women can deliver if given a chance,”said Mtsinje.

According to the founding principles of Bwalo la Chewa Foundation Heritage, the grouping is non partisan but, its members are free to join and support a political party of their choice.