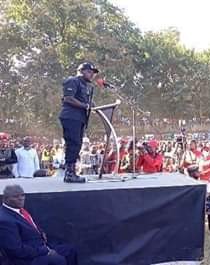 In a Statement released on 26 May 2020 the CFT Commander in Chief Timothy Mtambo wants MEC elections management system to be audited by independent IT specialists in presence of representatives from all parties that will contest together with representatives from the civil society, religious community and private sector.

“We want all stakeholders and the people of Malawi to approve and agree that they have enough faith in the credibility of the systems and voter’s roll before it is put to use again,”

MEC must not impose a polluted system and voter’s roll on Malawians, if contesting parties and the people of Malawi doubt the credibility of the systems is reliable by allowing all stakeholders to audit it”,said Mtambo.

Mtambo has also asked development partners like the USA, the UK and Germany among others, to intervene in the cleaning up of the voter’s roll for fair and credible elections.

“If our donors and development partners are serious about ensuring credible and fair elections as they purport to profess, we challenge them to demonstrate what they preach by joining CFT in calling for audit of the electoral systems and voter’s roll,”said Mtambo.

Mtambo has also questioned the resignation of MEC Chairperson saying the resignation was long overdue and there is no reason to congratulate Jane Ansah for wasting Malawians time.

“On the heels of her resignation we demand the appointing authority to move with speed on a suitable replacement and for avoidance of doubt, such replacement extends to the rest of MEC Commissioners and Secretariat officials who alongside Dr. Jane Ansah were found by both the Courts and Parliament to be incompetent and lacking seriousness forward their duty”,said Mtambo.

Meanwhile the Commander in Chief of Citizens for Transformation has pleaded with the appointing authority that they should not take longer hold the country at ransom by either being elusive or continuing with dill-dallying tactics on the urgent matter of National interest.

On 21st May, 2020 MEC chairperson Dr. Jane Ansah resigned from her position as Chair and many people and stakeholders including CFT questions the resignation describing it as a delaying tactic and also a rigging plan by the ruling party.