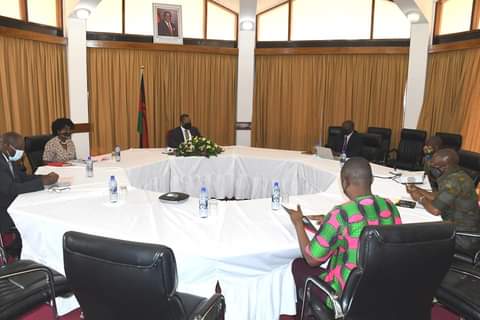 Chilima who is also the Minister Responsible for Economic Planning and Development and Public Sector Reforms says MHRC has outlined reform areas that are important to the country.

“First up was the acting Executive Secretary of MHRC, Mr. Wilson Mwafulirwa who outlined five reform areas that the constitutional body plans to implement to achieve its mandate of promoting and protecting human rights in Malawi,”

“I have welcomed the proposed legal reform to review the Human Rights Commission Act so that it responds to modernity. I also strongly recommended that the amendment must be comprehensive to avoid coming back to the same document within three years for another review,” the Veep says.

Chilima says the Commission is also proposing to redesign its complaints handling system which in its current state has resulted in backlogs and delays in concluding cases.

“This reform is welcome because it aims at improving or speeding up service delivery which is the spirit of the reforms that this administration is embarking on,” he says.

According to Chilima, it was also encouraging to note that the Commission is hitting the ground running to create a unit that will facilitate the effective implementation of the Access to Information Act.

“This development follows the commitment – by His Excellency Dr. Lazarus Chakwera, President of the Republic – to operationalise the Access to Information Act,” he says.

Later, the Vice President met with the National Audit Office to appreciate the reforms they are undertaking, prospects for future reforms as well as challenges they encounter in their operations.

“Basing on my discussion with the Acting Auditor General, Mr. Rexie Chiluzi, NAO has made remarkable progress on expanding the scope of audit areas to include parastatals. The institution has significantly reduced the backlog on audit reports to one year,”

“However, new opportunities still exist for NAO to introduce procurement audits, information system audits and projects audits in a bid to further expand its scope and ensure that there is value for money for taxpayers,” he says.

Chilima says meanwhile, as the institution works to amend the Public Audit Act as a reform area he has recommended that NAO must institute sanctions on officers who keep on answering to the same audit queries every year.

“Going forward, I have asked NAO to isolate the proposed amendments in the Public Audit Act that touch on its financial and reporting independence and the appointment of Auditor General so that we can discuss these further. In the meantime, both NAO and MHRC will submit a roadmap clearly indicating what will be achieved when before our next meeting in 90 days,” he says.

On a different note, the Vice President was concerned to observe the lack of women representation in the delegation of these two institutions.

“The whole delegation for the two institutions was male dominated despite the 60-40 requirement in the Gender Equality Act,” he says.