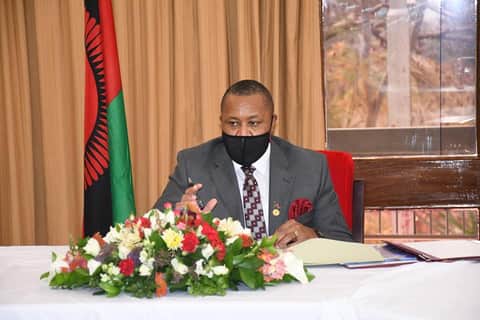 Vice President Dr Saulos Klaus Chilima has commended Minister of Gender, Community Development and Social Welfare Patricia Kaliati on how her ministry has performed so far on Public Sector Reforms.

Chilima made the remarks today after meeting the Minister Kaliati in his capacity as Minister Responsible for Economic Planning and Development and Public Sector Reforms.

“This afternoon, I held an interface meeting with the Minister of Gender, Community Development and Social Welfare, Hon. Patricia Kaliati on the reforms the ministry has undertaken as well as proposed areas of reforms going forward,”

“The welfare of all Malawians including vulnerable groups such as the elderly and persons with disabilities are at the heart of the administration of His Excellency Dr. Lazarus Chakwera, President of the Republic. The progress made on the three reform areas tasked to the ministry is commendable,” Chilima wrote on his Facebook page.

Chilima says , however , he has emphasized that these achievements should be a starting point for the bigger impact that the ministry is capable of achieving.

“Now that service providers have been identified for e-payment of cash transfer, the ministry must now work on efficiency of delivery of services to the beneficiaries,”

“During the meeting, I also emphasised that the review of the disability policy is non-negotiable and the ministry must make sure that this is achieved,” he says.

Chilima has urged the ministry to work with the Ministry of Justice to lift the injunction on the tabling of the NGO Bill Amendment and resolve issues with NGOs amicably.

“It is unacceptable that over a decade after enactment of laws protecting children, regulations are still not in place,”

“Going forward, I expect the ministry to provide a roadmap on proposed reforms keeping in mind that the ministry is central to this administration’s economic empowerment and social welfare initiatives such as pension for the elderly and the K75 billion loan programme,” Chilima says.