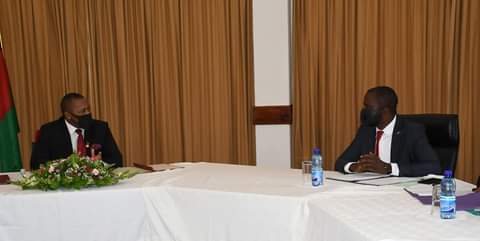 The Ministry of Civic Education and National Unity, whose mandate is to civic educate Malawians on various social and economic issues has outlined three reform areas that include institutional and legal reforms being a new ministry.

However, I have since advised the Minister that we should have a separate meeting to discuss the set up of the ministry and a further roadmap of the reforms that the new ministry will be embarking on.

MINISTRY OF FORESTRY AND NATURAL RESOURCES

Later in the morning, I had a meeting with the Minister of Forestry and Natural Resources, Hon. Nancy Tembo whose ministry’s vision is to ensure that we have a country that sustainably utilizes and manages forestry, water and the environment.

The ministry has been working on reform areas in its four departments; Forestry, Environmental Affairs, Water Resources, and Water Supply & Sanitation.

In the Forestry department, the ministry has increased private sector participation in the management of forests such as Viphya, Dzalanyama and Thuma. The ministry is also planning to extend similar initiatives in other forests around the country, among them Zomba and Chigumula timber plantations.

So far, about 70 percent of the 53,000 hectares of Viphya plantation is under private management, creating about 2,300 jobs, generating K4 billion revenue to the government and increasing timber exports.

Going forward, the ministry has proposed a number of reforms that include operationalization of the National Climate Change Fund, institute a total ban on thin plastics, operationalization of an Environmental Appeals Tribunal, development of harmonized water resources management information system and amendment of the Water Works Act.

One new reform area which caught my attention was the development of alternative sources of energy for cooking. I have since asked the ministry to consider encouraging briquette making through producers of charcoal who would form cooperatives as one way of controlling environmental degradation.

MINISTRY OF YOUTH AND SPORTS

In the afternoon, I met with the Minister of Youth and Sports, Hon. Ulemu Msungama on the six reform areas that the ministry is undertaking. These include the establishment of a sports marketing department, revision of management structure for sports, establishment of a National Sports Development Fund and development of standard guidelines for sports infrastructure.

It was, however, unfortunate to note that the Youth Department did not have any reform areas when the youth constitute over 70 percent of the country’s population. To this effect, I also suggested that a ministry that focuses on the youth should not lack funding because that is tantamount to ignoring 70 percent of the population.

Going forward, the ministry would like to introduce a flagship youth programme to holistically address youth empowerment and construct infrastructure across the country for recreation purposes for the youth.

I also challenged the ministry to take advantage of the K75 billion loan that the administration of His Excellency Dr. Lazarus Chakwera, President of the Republic, will be implementing so that the youth must benefit. The ministry should stand out as representatives of the biggest demographic group in the country.

As a way forward, I have advised the ministry to categorise the six areas of reform that the ministry presented into administrative, legislative and functional and then resubmit for further review.

Later, I held discussions with the Minister of Agriculture, Hon. Lobin Lowe who outlined three reform areas that his ministry has successfully implemented to date.

The ministry has restructured the input subsidy and seed services which has seen a reduction of tax payers money from K64 billion to K40 billion. I also reminded the minister that Malawians are eagerly waiting the implementation of the Affordable Input Programme where smallholder farmers will be buying a 50 kg fertilizer bag at K4, 495. This initiative is at the top of the agenda of His Excellency, the President.

However, the ministry has not managed to establish a Seed Services Unit that would guide the seed industry because the draft Seed Bill is yet to be presented to Cabinet. But the ministry has presented various ambitious reform areas which I have asked them to categorise into legislative/policy, administrative and functional sections for smooth progress tracking and identifying quick wins.

On Admarc reforms, I outlined my thoughts on this matter and asked the ministry to ensure that taxpayers will not dig deeper in their pockets to sustain the two separate functions that will come out of the institution once it is split. I emphasised that we must deal with this with the urgency it deserves but at the same time there is no room for any mistake.

I have also fully supported the suggested reforms towards mechanization of agriculture through plant and equipment hire or establishment of farm mechanization hiring centres.

Going forward, we have agreed with the ministries that they will present roadmaps that will include timelines so that we can be tracking progress of the reforms that the ministries have outlined. Every 90 days we will be be meeting with the Ministers to take stock of progress.