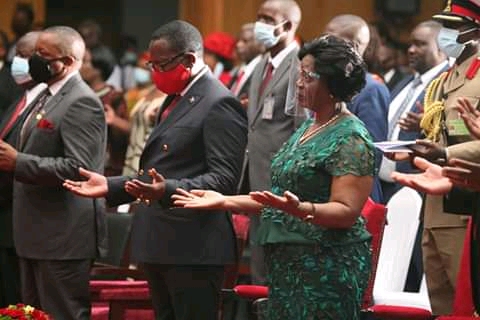 The Chairman of the Muslim Association of Malawi (MAM) , Sheikh Idrissah Muhammad has advised President Dr Lazarus Chakwera and Vice President Dr Saulos Chilima to continue working together to continue developing the country.

The MAM Chairman made the remarks yesterday during a Thanksgiving Prayers in Lilongwe where President Chakwera and Vice President Chilima were in attendance.

Sheikh Muhammad has advised people who are close to the two Malawi leaders not to divide them.

“My advice to all those close to our leaders is that they should watch out their tongue. You can divide the two or create enmity among other people because of your tongue. Tongue can build relationships or can break relationships,” he said.

Sheikh Muhammad hailed the Tonse Alliance Government for its plans to develop the country since taking over the administration from Democratic Progressive Party (DPP) in June, 2020.

The MAM Chairman quoted Quran 4 verse 59 to cement his speech “O believers! Obey Allah and obey the Messenger and those in authority among you. Should you disagree on anything, then refer it to Allah and His Messenger, if you ˹truly˺ believe in Allah and the Last Day. This is the best and fairest resolution.”

The MAM Chairman has commended the Tonse Alliance Government for actualising Public Sector reforms and universal fertilizer subsidy despite taking the leadership mantle in awe of COVID-19 pandemic.

“Let’s be thankful and not pretend as if we don’t see it with our naked eyes. Reforms are very important for the country to realize meaningful development,” Sheikh Muhammad said.