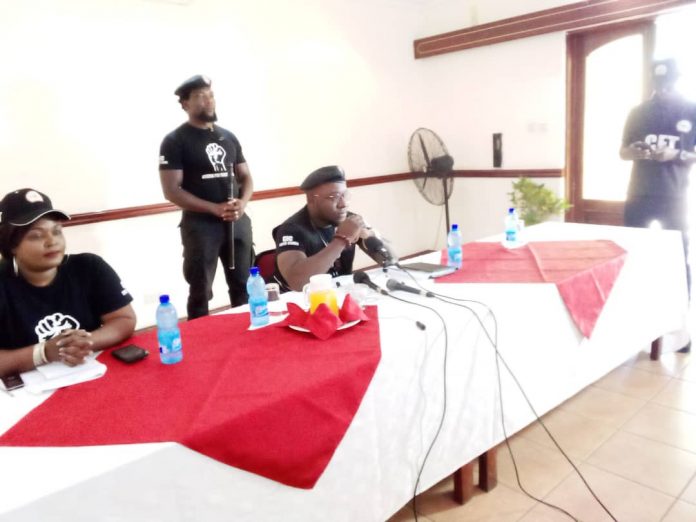 Citizens for Transformation Commander in Chief Tomothy Mtambo has demanded credibility of the electoral process which include the credibility of MEC Chairperson and commissioners and also credibility of management system.

Speaking today in the morning during a press briefing Mtambo said people lost trust in the current MEC staff including the chairperson and that the coming elections can not be managed by the same people whom where found incompetent.

“Yes as Citizens for Transformation we hold an opinion that our country is sitting on a time bomb we are going to an election where one those that are managing the process are not trutsed, two the system used is not trusted and three the procedure and processes laid down are not being respected so if we are talking about a competent electoral process you need to trust the people that you have given to manage the process that’s why we call it an independent electoral Commission,”

Mtambo disclosed that the system that was used in the last elections in 2019 is the same system they are using right now and that system which were used it was not even credible and fair.

Mtambo has also noted that if all stakeholders will not be part and parcel of the audit process the CTF will go to court.

“We have asked all parties to be involved in audit process failing to do so we will go you Court. We will do that because our Courts are independent and they have proven beyond measures to say they are principal they will be able to listen to anyone. So we are saying we don’t trust this MEC we don’t trust this government that’s why we arr saying a national governing council should be instituted because Muntharika is actually sitting on the whole process by not firing MEC chairperson and commissioners ,by keeping quiet when wrong things are happening, by not allowing the police service to act when evil things are happening even when electoral violence is happening”,said Mtambo.

The Citizens for Transformation Commander in Chief has called for immediate audit of MEC’s management system by IT specialists from all political parties involved in the polls to authenticate it’s credibility.

The CTF power movement has vowed that it will not allow anybody to manipulate the electoral process and that’s why they are saying that the audit process should happen because no matter what on 2 July Malawians are voting and between now and the polls all these activities should happen.