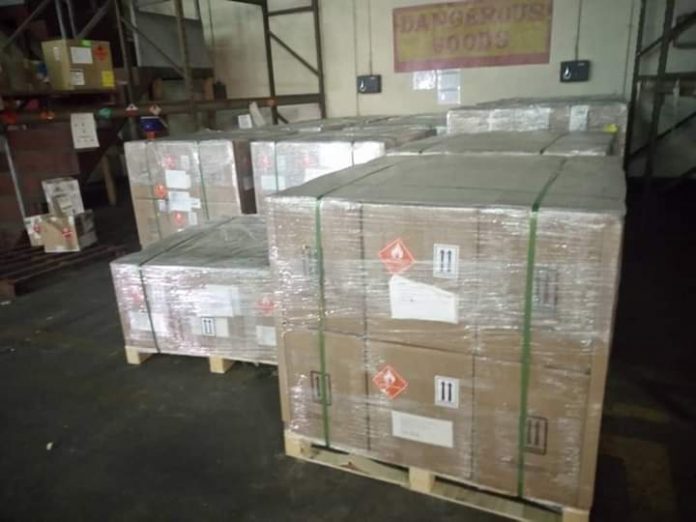 Political parties, candidates and all the electoral stakeholders on Wednesday failed to witness the arrival of a cargo plane from China carrying a consignment of 36,000 indelible ink bottles and 31,500 pieces of thumb print pads at Kamuzu International Airport (KIA) in Lilongwe.

Malawi Electoral Commission (MEC) communicated to the electoral stakeholders in its letter dated 2nd June,2020 to get accreditation from its Director of Media and Public Relations, Sangwani Mwafulirwa that the cargo plane will touch down on Wednesday,3rd June at 17:30 hrs in a flight number ET 3877.

The communication says after the receipt of the consignment at the airport, the indelible ink and thumb print pads will be taken for storage at MEC regional warehouses in Lilongwe, Mzuzu and Blantyre and by the time the electoral stakeholders arrived at the airport, they found that the materials already arrived and were off loaded without their presence.

MEC spokesperson, Sangwani Mwafulirwa said there was no enough time to inform the electoral stakeholders about the change.

Malawi Congress Party (MCP) Elections team leader, Howard Kachipanda expressed a surprise of receiving no communication that the cargo plane will arrive earlier than the time stated on the communication letter saying the party is not suspecting foul play but wondering.

But, speaking in Dowa during the Master of Trainers training workshop, MEC Commissioner, Dr Jean Mathanga said the Commission has put on hold printing of ballot papers until Parliament sets a date for Fresh Presidential Election.

Dr Mathanga appealed to the Master of Trainers to emphasize to the Presiding Officers to avoid a repeat of the May 21, 2019 Tripartite elections where tippex was used.

Meanwhile, MEC has announced that UDF and UTM monitors will not be allowed in polling centres saying the Commission will only allow Monitors of Dr. Lazarus Chakwera and Prof. Peter Mutharika as the one who presented letters of nominations.