As far as Islamic Shari`ah is concerned, the first 10 days of Dhul-Hijjah are an opportunity for every Muslim to gain abundant reward. The rewards of the good deeds performed during these specific days are maximized as reported by Prophet Muhammad (saw) and confirmed by the deeds of his Companions and righteous predecessors.

Ibn `Abbas (ra) reported that the Prophet said, “There are no days on which righteous deeds are beloved to Allah more than [the righteous deeds on] these 10 days.” The people asked, “Not even jihad for the sake of Allah?” He said, “Not even jihad for the sake of Allah, except for the case of a man who went out, giving up himself and his wealth for the cause of Allah, and came back with nothing.” The Prophet is also reported to have said, “Fasting on the day of `Arafah expiates the sins of two years, the past year’s and the next year’s.” The first 10 days of Dhul-Hijjah are definitely days of special blessings in which we are encouraged to exert ourselves vigorously in acts of devotion, worship, and virtuous deeds.

Thus, it is definitely not a bid`ah (innovation in religion) to fast on these days as other misleader have said. It is rather a well-established sunnah confirmed by the clear statements and practice of the Prophet (saw) and the pious predecessors. The first ten days of Dhul-Hijjah have been singled out especially for great merits and excellences like no other days in the Islamic calendar. Allah in His infinite wisdom and mercy has chosen to dispense infinite spiritual blessing and rewards.

Thanks to the high status these days enjoy, Allah has made them worthy of making an oath by them, when He says (By the Daybreak, by the Ten Nights) (Q 89:1–2). According to some Qur’an commentators {mufassirun}, the ten nights mentioned here are none other than the first ten nights of Dhul-Hijjah; others, however, hold the view that these nights specifically refer to the last ten nights of Ramadan. Anyhow, no one denies the fact that the first ten days of Dhul-Hijjah possess tremendous blessings and excellence.

This has been confirmed by the Prophet (saw) who is reported to have said, “There are no days that are dearer to Allah in respect of devoting oneself to devotion and worship than the first ten days of Dhul-Hijjjah.” Based on this and similar traditions, scholars have stressed that the days and nights of Dhul-Hijjah must be set aside for intensive dedication to worship, increased preoccupation with virtuous acts, and contemplation. Virtue and contemplation go hand in hand in Islam.

Works that are especially worthy of mentioning include reading the Qur’an; making dhikr and du`aa’; performing supererogatory prayers; sending benedictions on the Prophet (saw); rendering acts of kindness and compassion; visiting the sick; counseling what is good and forbidding what is wrong; bringing peace, reconciliation, and harmony among people; helping those who are in distress or need, and so on. While all of these works are to be active concerns of all Muslims every single day of their life, these must certainly be multiplied in these days more than any other time.

Who and When to Fast?? Fasting is especially mentioned as a most meritorious act of devotion to be performed in the first nine days of Dhul-Hijjah; this is true of those who are not performing Hajj. According to some traditions, by fasting these days, one is accorded a tremendous opportunity to gain repentance and forgiveness. If, however, a person cannot afford to fast all nine days, he may at least fast the ninth day of Dhul-Hijjah, which is known as the Day of `Arafah. However, it is also worth mentioning that while fasting the first nine days of Dhul-Hijjah is recommended, it is forbidden to fast during the days of the `Eid.

This prohibition is not limited to the tenth of Dhul-Hijjah; rather it extends also to the eleventh, twelfth, and thirteenth, for all of these are days of festivities and celebrations. Finally, it is perhaps worth mentioning that the special merits and excellences associated with the days of Dhul-Hijjah are in no small measure due to the fact that they coincide with the performance of the greatest rites of Hajj.

The foremost days of Hajj are the following: the day of tarwiyah, which falls on Dhul-Hijjah 8 and is the day the pilgrims resume ihram and proceed to Mina; the day of `Arafah, which is on the ninth, the day of the great ritual of standing on the plain of `Arafah; and the day of nahr, which falls on the tenth and is the day of sacrifice and stoning the Jamarat. The fact that the pilgrims are gathering in the sacred sites to perform the greatest rites of Hajj is itself a most significant event; it is, therefore, becoming of those who are not pilgrims to show spiritual and emotional solidarity with the pilgrims.

Therefore, as the pilgrims are engaged in performing the great rites of Hajj, Muslims wherever they are, are also encouraged to partake something of the great spiritual feast and experience by performing such acts of virtue and devotion as they are capable of. May Allah the Most Exalted and Glorious expose us to the wisdom of these rites and bless us all to participate in them with our whole bodies, minds, and souls. Amen. 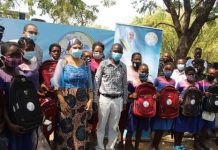