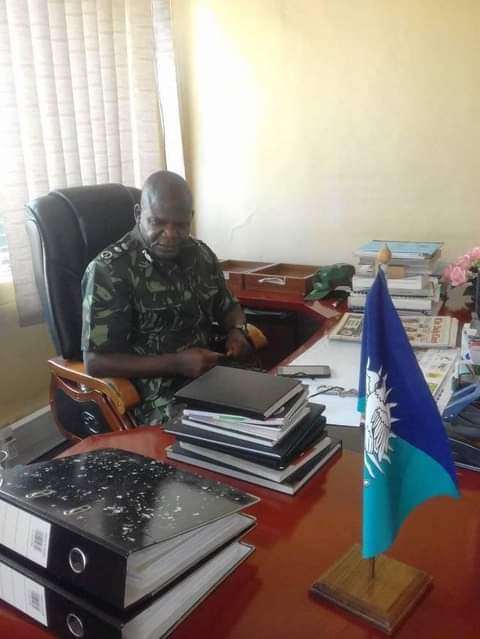 Mtekama who was a Muslim passed on at Adventist Hospital in Blantyre, National Police Spokesperson James Kadadzera said.

The cause of his death is still sketchy but his remains are expected to be laid in his home village in Nkhotakota district.

A TRIBUTE TO BOB MTEKAMA AND A MESSAGE OF CONDOLENCES
by Ishmail Wadi, Former Director of Public Prosecution, 2004 – 2006.

The passing on of one tough persevering intellectual in the Police service, Bob Mtekama, I must say, is a sad sudden unexpected departure.

I first met Bob Mtekama when I served the Government of Republic of Malawi as Director of Public Prosecution in 2004. I can testify that he was an intelligent, courageous and well trained cop. He was instrumental in the investigations of many cases from homicide, armed robbery, domestic violence and many more. He was the only cop I knew then that had been trained in forensic investigation.

After my unceremonious and compelled exit from my post, like many professionals that worked with me, they were psychologically tortured. Immediately after my exit, Bob was accused of having links with opposition parties, a false allegation that was intended to have him victimized and frustrated. So he was mistreated by the Police Service with for example a posting to general duties to a remote area. There were times he nearly gave up his profession but knowing very well that his skills in investigation were distinctive I told him to persevere and that good things will come in future.

The truth is Bob was a professional impartial Policeman. He executed his work without fear or favour. The allegations made against him were on the basis of his choice of religion. He was a Muslim and some crafty vindictive opportunist saw that as an opportunity to advance their malice and accused him of having links with UDF, the opposition party then. This can never be true because the time we worked together, he investigated and arrested prominent persons that were Muslims and others were even convicted. But one incident is worth mentioning, that was the savage attack of Sheikh Bughdad of Liwonde, he was stabbed with knives, hacked with Panga by young democrats. He however survived the attack but died a year later. I had requested Bob to investigate the incident and after a month he reported to me that he had arrested 12 young democrats believed to have been the ones that executed the premeditated the heinous crime. I asked him, that the incident happened at night and there was not even available eye witness statement on the file. His response amazed me. He began by telling me that his investigation revealed that two daughters of the late Sheikh left a day after for Zambia to seek refuge. He said he followed them to Zambia and interrogated them as they were eye witnesses and also managed to get hints. He explained that Sheikh Bughdad supported NDA and the violence was linked to his political opinion. He then looked at who were the likely adversaries to his opinion and looked at the prominent members of the then ruling political Party and even looked at their bank accounts and come across a transaction of a senior politician which revealed a payment of MK300,000 made at the same time and cashed at the counter at a bank in the District. He said he interrogated the person who received the cheque and he revealed that it had been shared amongst 12 persons from the same area but denied involvement and also that the payment in relation to crime. But he says the timing of the payment, the number of people that benefited and the proximity was very suspicious and he arrested all of them. The suspects were of different religious faith but majority were Muslims. So I was able to deduce that Bob was impartial in his work and did not favour persons of his faith. To this I call upon persons in various institutions and the general public to stop attacking and making empty allegations of others on grounds of their choice of religion as well as level of practice and commitment. This should also extend to atheists, do not victimise them for their choice. Let us mature in our thinking and be tolerant in our actions, voices and ink or typing. Because we are of different denominations, it means from Friday to Sunday we are congregate with one intention to worship God, our creator. Lets us learn to celebrate our diversity and not to undermine it.

Because of the oppression and victimization that was unleashed against Bob, He shared me his views that he wanted to study law in Zanzibar, as part of his career advancement and he also did not hide that he wanted an opportunity to distress and to breathe some fresh air as he was undergoing through maximum dosage of oppression intended to force him to give up on his career. I encouraged him and told him not to give up but persevere and Zanzibar University was the right choice to the university.

True to my words, the new Government recognized him as a rare distinctive fearless Detective and quickly restored to him to the right position. But just like what I have gone through, all these negativity inevitably triggers background stress and stress comes with a package of health problems. Bob developed High Blood Pressure and Diabetes – and that condition is not easy to manage.

I have shared this with you so that before our brother is laid to rest, we should have a moment to feel the pains and agony our brother Bob went through so that we can take an initiative to stop causing pain to others that are still living and I equally shared his struggle so that we can be encouraged not to give up on our dreams and the story of his strict professionalism so that we can also be inspired to success. Success does not come easy and sometimes it comes with hardship and the medicine is endurance, perseverance, to stay strong and positive and if it gets worse, not hesitate to seek refuge in other positive things and not to allow frustration take you to excessive alcohol and sometimes violence.

I write this full of tears because Bob has gone too soon. Gone at the most critical time. Gone before he could enjoy the final fruits of his hard work.

I would also want to use this opportunity to invite everyone to be a Vigilant Citizen and demand for functional Independence of various institutions of Government and to have strict checks against political interference, oppression and arbitrariness and further protect the many professionals that are subjected to abuse and mistreatment simply for doing the correct thing, just like the Malawi Law Society and the general public stood their ground to defend the independence of the office of the Chief Justice from interference with the tenure of officer, the public vigilance must continue.

My heartfelt and Sincere Condolences to the bereaved families, the Chiefs , the District Commissioner and people from Nkhotakota District, workmates, family and friends, the Inspector General of Police and the entire Malawi Police Service, The President and the Government of the Republic of Malawi for such a great loss of a true son of our beloved land.