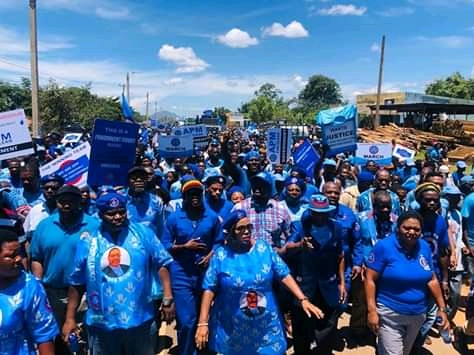 The Magistrates and Judges Association of Malawi( MAJAM) has condemned the demonstrations and attacks on the judges by the Democratic Progressive Party (DPP) and its leadership saying the conduct in this regard does not only undermine the rule of Law but also the integrity and independence of the Judiciary.

MAJAM is expressing worries that since the Concourt’s judgement was delivered, DPP which is the ruling party and whose leader, President Peter Mutharika, is one of the Respondents have chosen to openly attack the judges who presided over the case and the Judiciary in general.

It is their view that the attacks on the judges and demonstrations against them by the DPP are a misplaced phenomenal and one that is least expected in a constitutional democracy as of Malawi.

This is contained in a statement released by MAJAM on DPP demonstrations attacking judges and Judiciary in Malawi signed by the President of the Association, His Honour, Howard Pemba dated 20th February, 2020.

In a statement, MAJAM says the DPP need to be reminded that all the five judges that presided over the constitutional referral case had nothing personal to do with any party to the case and had no personal interest whatsoever to its outcome and all they did was to carry out their duty as called upon by the Law.

A statement says as a ruling party, the judges expected the DPP to rise above petty politicking and to act as a model to other parties in upholding and respecting the rule of Law.

“The matter for which the demonstrations are being conducted is now in the Supreme court of Appeal. One would wonder as to what message the DPP is trying to advance with its demonstrations when in fact, the matter is in the hands of the Justices of Appeal “, reads a statement in part.

In a statement, MAJAM says they will not just sit down and silently watch judges being personally and professionally attacked without any justified cause saying if there is any suspicion against them, they would want to believe that there is due process of the Law that must be followed without fear or favour.

A statement says judges are aware that the DPP members and its leadership have a constitutionally guaranteed right to demonstrate , calling upon it to desist from and condemns such attacks being made to the judges.

The thee international legal bodies say democracy will be gravely undermined if judgements of the courts are not respected and if there are unfounded accusations against the Judiciary.

They say any allegations of corrupt must be investigated thoroughly by the correct authorities and accurate information must be reported to the members of the public and any measure on the part of supporters of the ruling party which is seen as eroding the independence and integrity of the Judiciary, is a matter of deep concern.