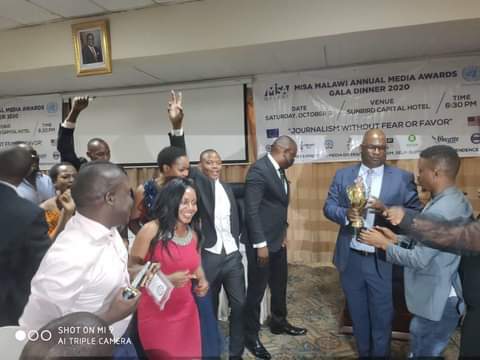 This year, no Muslim journalist scooped any award at the MISA- Malawi Annual Media Awards Gala held under the theme ” Journalism Without Fear or Favour ” two days ago at Sunbird Capital Hotel in Malawi’s Capital, Lilongwe.

Speaking in an exclusive interview with Malawi Muslim Website, a veteran Muslim journalist in the country, Bashir Amin who previously won a number of awards says the development must worry Muslim journalists.

Amin says there may be two reasons for Muslim journalists to miss on the list of outstanding journalists.

“First of all, it could be that our Muslim journalists did not participate in the awards through the prerequisite submisssion of articles published or broadcast within the period as announced by MISA Malawi Secretariat. It should be noted that there is no automatic recognition of somebody’s work until their work is submitted upon opening of the same,”

“In the same vein, it should further be acknowledged that only bonafide members of the media body through duly annual subscription are eligible for the awards which means that non registered journalists cannot participate in the awards. The question is, are all or most of our Muslim journalists and media bodies registered and affiliated to MISA Malawi respectively? In this case, if we did not have representation in the submission of articles we can not expect any Muslim names to come out as award winners in any category,” he says.

According to Amin, secondly, it may reflect a substantially lapse and defect in professional delivery of journalistic work.

“The submissions go through reputable judges who base on factual, ethical, truthful, complete, balanced, original and exciting stories to warrant an award. Articles or submissions devoid of professional standards are never considered. It should therefore call for much efforts among Muslim journalists to do good work that can stand out and compete at not only national level but even regional and global levels as well,”

Amin urges Muslim journalists in the country to work hard to be recognised .

“I would call on Muslim journalists to work hard and expose themselves to the outside world so that they don’t only earn fame but also make a difference through their work that can have a bearing effect and impact on the social economic development of people’s lives. Journalism shouldn’t be for fame but bringing good service to society,” he says.

Amin won BP Top 8 Best Electronic Journalist in 2003 while working with Radio Islam, while at MBC, won MISA Malawi Best Farm Radio Journalist in 2015 and 2016 respectively and the Isu Elihle, an International Award in Child Reporting by Media Monitoring Africa in 2017 says.

During the gala, journalists from media houses won awards in several categories.