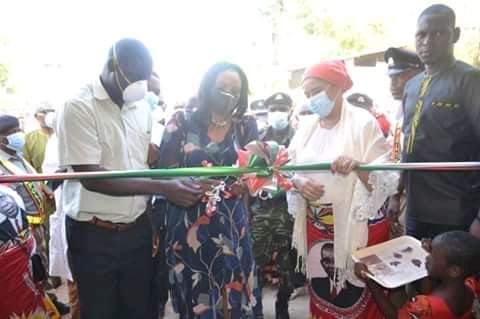 According to Mia, whilst living in Ngabu she has witnessed for years first-hand the distress of bereaved families forced to make hasty funeral arrangements or transport bodies back and forth due to having a non-functional mortuary at the health facility.

“The extreme heat in the Lower Shire rapidly increases the decomposition rate which is a further dilemma.As a member of Parliament for the Constituency, this sad state of affairs prompted me to construct a new mortuary so that the bereaved families could make their funeral arrangements without unnecessary panick,”

“I combined my personal resources with my Constituency Development Fund (CDF) to construct a new mortuary equipped to accommodate 6 bodies,” she says.

The Deputy Minister of Health was the guest during the opening of the facility.

“I was honoured to have the Deputy Minister of Health Chrissy Kalamula Kanyasho as my guest of Honour at the opening ceremony of the new mortuary on the 16th of October 2020,” he says.

According to Mia, the Deputy Minister was excited and said the project was a burden lifted on her Ministry.

“I am pleased that the new mortuary will ease the funeral burdens of the bereaved families of my Chikwawa Nkombedzi Constituency along with those from surrounding constituencies,”

“The mortuary will also assist law enforcement bodies from the area that may need to carry out post mortem procedures as part of ongoing investigations. They may keep a body in the morgue for sometime while they are doing the same,” she says

Mia who is also the Deputy Minister of Lands pledges to continue being improving the well being of her constituents in all aspects of their day to day lives.