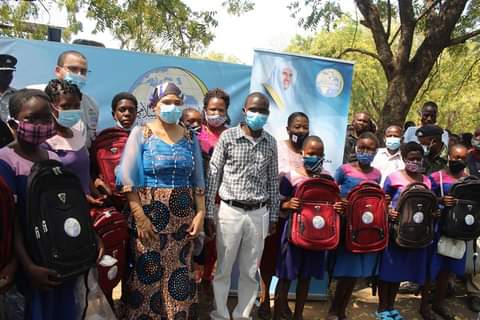 Muslim Member of Parliament (MP) for Chikwawa Nkombezi Constituency, Abida Sidik Mia has donated learning materials to girls in her area as schools are expected to reopen on 7th September,2020.

Mia who is also the Deputy Minister of Lands has also pointed out that in her constituency like all other constituencies across the country has not been spared the plight of young girls including even primary school girls that have fallen pregnant due to the prolonged stay at home caused by the covid 19 induced closure of schools.

“Now that the State President, Dr Lazarus Chakwera, has directed that schools be re-opened this September, I thought I should encourage and excite our young girls to focus on school and to work hard by donating school bags each kitted with a calculator, exercise books, ruler, pens, mask and coloured pencils,” she says.

According to Mia , the intervention was mainly for girls though few boys with outstanding performance in class were also given school bags.

Mia says in total, 450 learners drawn from Makande Model Primary School and Mchenga Primary school, by far the largest primary schools in her constituency, have benefited from this intervention.

“The other schools in the constituency will also enjoy various forms of assistance in the future subject to availability of resources and the generosity of donors,”

“After this exercise, I also donated 2,500 bags of 10kg maize to over 2000 elderly people from around Makande and Chidimba primary schools in my constituency,”- Mia says.

The Deputy Minister of Lands says she sourced the donation from Muslim World League.