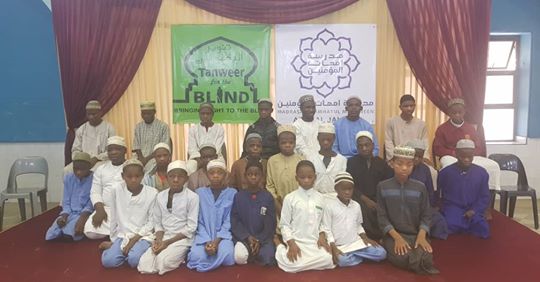 Muslims in Malawi have been challenged to take the leading role in assisting people that are disadvantaged.

Director for the Tanweer for the Blind School, Maulana Riaz made the call during the graduation ceremony of two visual impaired students who have completed memorization of the Quran from the school.

He said people with disabilities are capable of doing anything that anyone can do but they lack support and encouragement.

“We need to help them by teaching them according to the skills they have so that they should take part in national development,” he said.

Maulana Riaz said what the school is doing is acknowledging their talents by giving them support to keep them away from begging.

He said he is happy to see learners especially girls that could not speak and write Arabic are now able to do so.

“We should rise and move the stigma towards people with disabilities because they are also humans like us and there is no limit that they cannot do anything,” he said.

One of the students from the school Shayibu Eliyasi who is now pursuing Bachelor of Education language at Chancellor College said initially he was a plumber but he became blind five years ago and he was just staying alone.

He said he heard about the school through Radio Islam and he applied for a place in the first Jalasa.

“When l came hear l met my friends that are also visually impaired like me and l accepted it and we were encouraging each other,” he said.

He said he accepted it and the school has assisted him to have discipline, study a good life as well as laying a foundation for his future.

Eliyasi said is now able to read and write and operate a computer.

He said: “Let me urge other people who have or are facing the challenges like ones l went through to come to Tanweer for the Blind because they will be assisted and their life will change forever. people should not take visually impaired people as a burden because they can do what anyone can do.”

Concurring with Eliyasi,  one of the teachers at the school Ibrahim Amin, said the school has assisted a lot because in the past Muslims who are visually impaired were learning in schools for other faiths something which was affecting their faith.

“The coming of the school has helped Muslim students to strengthen their faith because they teach them both the Quran and secular studies because it is the only school for Muslims for such kind in Malawi,” he said.

He said students from the school are able to do any activity that any Muslim can do adding that now they are able to send the students to secondary schools for further studies.

Amin therefore asked all parents and guardians who have children of similar to not hesitate sending them to the school.