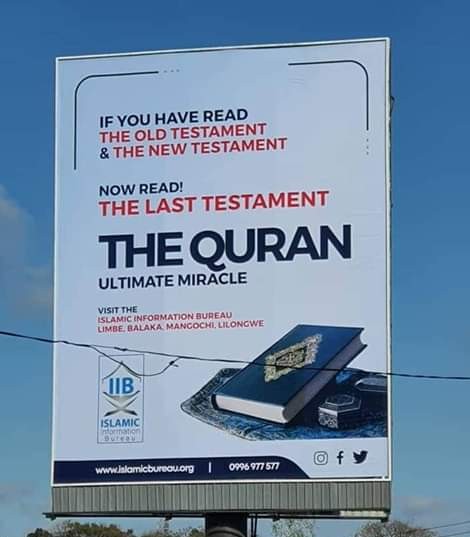 Muslims are not happy with Malawi Government in a way it is solving the billboard saga.

The matter comes after Ministry of Civic Education and National Unity released a statement asking the Blantyre City Council (BCC) to apologize to Malawi Muslims in away it handled the matter.

Two weeks ago, BCC removed the billboard that was erected by Islamic Information Bureau (IIB) after Evangelical Association of Malawi (EAM) claimed that it had words that were offending Christians.

Soon after the EAM letter was released, the BCC went to remove the billboard even before engaging Islamic Information Bureau, the thing that has angered many Muslims accusing the council of partisanship.

Later on, the Ministry of Civic Education and National Unity intervened by referring the matter to PAC, which did not go well with Muslims as it meant like asking people who are fighting to resolve the issue themselves.

PAC is a grouping of religious leaders from different faiths, predominantly Christians and Muslims.

The billboard carried a message: “If you have read the old testament and new testament now read the last testament, The Qur’an, Ultimate miracle,”

Both IIB and Muslim Association of Malawi have refuted the claims that the message is an insult to Christian Faith saying Muslims believe in all books therefore there was nothing wrong with that message unless proven otherwise.

Commenting on the letter by Minister of Civic Education and National Unity Timothy Mtambo addressed to BCC Chief Executive Officer (CEO), Muslims have said government would have asked the BCC to restore the billboard in its original form while waiting for the discussions from PAC, saying apology only is not enough.

“What we all want is the restoration of the billboard”.

“We have seen the letter from The Ministry of Civic Education which has been signed by the Minister Honorable Timothy Pangonachi Mtambo and the letter has been addressed to Blantyre City Council so that they should apologise. There is no statement which they have said about the restoration of the billboard,” Abbas Suleiman says.

AbdulRahman Banda says IIB spent a lot of money on the billboard hence the need for BCC to bring it back.

“Blantyre City Council (BCC) has to pay for the cost because we know that Islamic Information Bureau paid a huge some of money for the billboard to erected,”

“So what we need is the restoration of the billboard that’s all,” he says.

Last week, Muslim Association of Malawi (MAM) organised a Press Briefing where it stressed the need for restoration of the billboard in its original form until BCC proves in the court of law that the message that was written on the billboard was unconstitutional.

This means that apology only, as asked by Minister Mtambo is not enough unless the billboard is restored.

Since the incident, BCC has been quite on the matter.