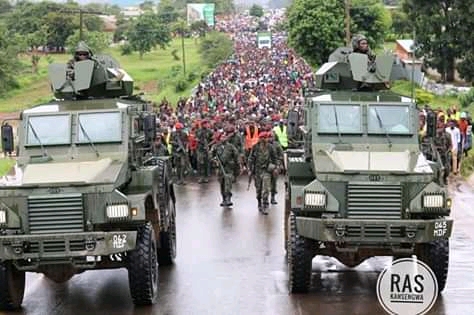 The demonstrations that took place in major cities namely Lillongwe, Blantyre and Mzuzu meant to force the Chairman of Malawi Electoral Commission (MEC) Jane Ansah to step down for allegedly mismanaging the 21st May, 2019 elections.

As their constitutional right, Malawi Muslims joined other demonstrators.

They told Malawi Muslim Website that it is their right to participate in such gatherings.

“The future of our children should be determined today. I think we are supposed to be taking part in such protests because we are Malawians too. We need to be enjoying our constitutional rights,”

“We are not against the rulling Government but we need justice on the queries that Malawians are raising,” Juma from Lillongwe said.

Haroon from Blantyre said he thought of taking part in the demonstrations because it is a must to speak on public issues.

“We need to speak when we feel like things didn’t go or are not going well. ACB is supposed to name the people who needed to bribe the judges because their silence on the matter can distort the truth. Muslims also voted and are looking forward to a fair judgement,” he said.

The demonstrations ended at Capital Hill in Lilongwe where HRDC gave a petition to ACB. Among others, HRDC gave ACB 72 hours to name and arrest two people who were planning to bribe the Constitutional Court judges handling the presidential election case.