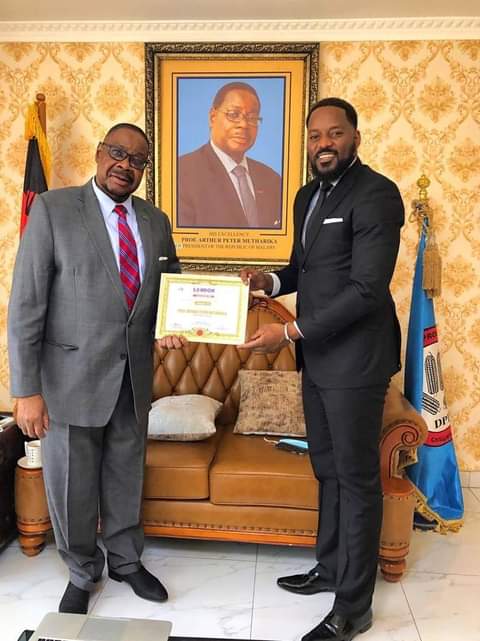 The London Political Summit which is a global think tank has honored Malawi President Dr Lazarus Chakwera and the country’s former President Professor Peter Mutharika by conferring them with Uhuru/Raila Peace Accord Award at the 5th London Political Summit and Awards for peaceful power transition after the nullification of 2019 Presidential Polls that were dubbed “Tippex Elections.”

“The two political figures were awarded because they ensured a smooth and peaceful transition of leadership through upholding the separation of powers of the arms of government, through civic education and the protection of voter’s rights, in the pre- election period,” Kalirani says.

According to Kalirani, the Uhuru/Raila Peace Accord Award was inaugurated in 2018 in the UK’s House of Commons.

“The award is in recognition of the “Handshake” between Kenya’s President Uhuru Muigai Kenyatta and the former Prime Minister Raila Amollo Odinga. The Handshake restored peace after contested election results,”

“The Award will be given to African Heads of States who demonstrate statesmanship and ensure peace and stability is sustained in democratic processes following elections,” he says.

The summit’s ambassador says President Chakwera was honoured on Friday 16th October 2020 by the London Political Summit through through him.

“Receiving the award on his behalf was special political advisor to the president Mr Chibvunde. The Award ceremony was officiated virtually connecting London and State House in Malawi,”

“In a Previous virtual ceremony also at his retirement home in Mangochi, former President Mutharika received his Award presented by London Political summit through its ambassador,” Kalirani says.

After the nullification of 2019’s Fresh Presidential Polls, Chakwera defeated Mutharika in a court ordered fresh presidential election making him (Chakwera) the sixth President of the Republic of Malawi.