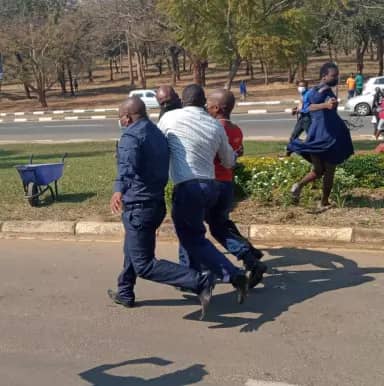 The Human Rights Consultative Committee (HRCC) Board and the entire network of 96 Non Governmental Organizations (NGOs) says it has learnt with deep shock and disbelief the Government of Malawi’s undemocratic and inhuman treatment of CDEDI leader, Mr. Silvester Namiwa, who is still being held by the police on nationally accepted advocacy in pursuit of defending Malawi’s hard earned money.

The HRCC says it further learnt with great shock that Namiwa upon arrest at the Parliament building, he was being cell shopped which included him being taken as far as Linthipe police station before being returned to spend a night at Area 13 police station at the City Centre in capital, Lilongwe.

The organization says it is surprised how a rights activist who was demanding further accountability by the state through Parliament on a matter that President Dr. Lazarus McCarthy Chakwera has already started acting on, will be subjected to such inhuman and degrading treatment, condemning this action by the state.

In its statement, the HRCC says it has further been saddened by the breaking news learnt on Thursday that while arriving at Lilongwe [Area 3] police station, Mr. Namiwa was placed in leg irons as if he were a terrorist or answering matters of mutiny or murder saying this is deplorable, condemning it in the strongest terms demanding the disciplining of the officer who initiated the placing of leg irons or chains on Mr. Namiwa.

“HRCC finds the actions and conduct of the police and Lilongwe City Assembly deplorable and undemocratic as they are against the very constitutional rights of free speech, freedom of assembly and right to demonstrate,”reads HRCC statement.

On its part, the Pan African Civic Educators Network (PACENET) has described the arrests of Namiwa, a Civil Right Activist as unwarranted and a serious betrayal of Malawi’s constitutionally enshrined ideals of freedom of association, assembly, expression and political expression.

Leader of opposition in Parliament, Hon. Kondwani Nankhumwa MP on Thursday afternoon visited Sylvester Namiwa at Area 3 police station in Lilongwe where he spoke against police manhandling Namiwa as he was being whisked away describing such acts as to have no space in the democratic Malawi.

Meanwhile, the United Democratic Front (UDF), has asked all well-meaning Malawians to stand up and vehemently resist any attempt by the Tonse Alliance administration to bring back the old draconian rules which saw innocent Malawians jailed on flimsy political reasons, saying in all fairness, the Tonse Alliance government should be the last to arrest human rights activists simply for carrying out demonstrations.

The UDF says video clips of the event circulating in the social media shows that Mr. Namiwa was whisked away from Parliament building by plain clothed security personnel and thrown in a waiting Ministry of Information coaster in a fashion befitting a criminal.

“An arrest of a human rights activists smacks of dictatorial tendencies by the regime and should never be condoned at all cost, this is how dictatorships start and Malawians cannot allow a return to their dark past,’’…..reads the statement in part signed UDF National Acting Publicity Secretary, Yusuf Mwawa.