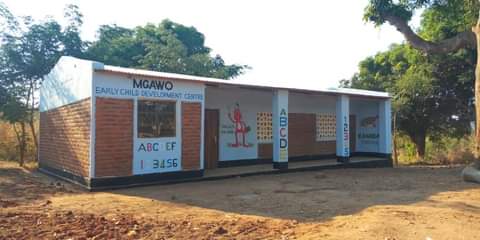 The Coordinator of the non-profit making organisation Brother Farook Dick has confirmed the development to Malawi Muslim Website.

“Girl Child Education Movement (GCEM) has built this Modern Early Childhood Development Centre in order to boost up child education since we believe to assist starting from the grassroots level.”

“Despite the hard times we are going through worldwide because of the novel coronavirus, we have managed to complete a Modern Mgawo Early childhood Development Center (ECD) in Mgawo village, Traditional Bwananyambi in Mangochi District,” he says.

Dick has commended World Connect for financing the project.

“This Mgawo ECD has been possible with US$5,000 funding from World connect. we thank World Connect for making this possible although we are in hard times,” he says.

According to Dick, GCEM is not only known by building ECD centres. The organization also empowers girls to stay at school by supporting them.

“So far we have achieved a little in front of people but it means a lot to ourselves. Some of our achievements are; we have managed to pay school fees to some needy girls. We have supported them with school uniforms, clothes and we even bought bicycles for them. In short we have managed to support 90 percent of their secondary school needs, ” he says.

Dick further added to say,” we donated these bicycles to them because we wanted to easy the distance they travel in search of education. We did this knowing that girls give up early so we wanted to empower them to Continue going to school”.

GCEM also distributed fertilizer to 7 families of girls they support in the same area.

“Realizing that getting food is a challenge for many families, we have provided 14 bags of fertilizer to the 7 families of girls we support. Each family got two bags and we are glad that they have managed to get enough maize during the last harvesting season” he said.

Commenting on the matter, one of the beneficiary of school support and fertilizer, Jausa Ali hails GCEM for supporting them.

“We are happy because this year we have managed to harvest enough food because of the donation GCEM gave us, ”

“In the past years, we were struggling to get enough food. We were having a few food to survive on but with the coming of GCEM donation, we have managed to get much food”said Ali

She continued to say, “we thank GCEM for their support with fertilizer and the school support they provide to us, they should not stop supporting us”, says one of the beneficiary of fertilizer.

Girl Child Education Movement (GCEM) is a community-based organization located in Group Village Headman Somba, T/A Bwananyambi, Mangochi. The movement was initiated in 2015 by members of the community who comprised religious leaders, parents and chiefs.

The aim of the organization is to advocate for girls’ education and provide them with necessary support that can make them GO and STAY in school. This is after the community saw that a lot of girls are rushing into marriages even before reaching the puberty age, something that has contributed a lot to the high number of gender-based violence among others.

Currently, the organization has ten active members and volunteers.

This is the second modern ECD Centre the organisation has built in the area since 2018. They have to construct more that 20 by 2030.