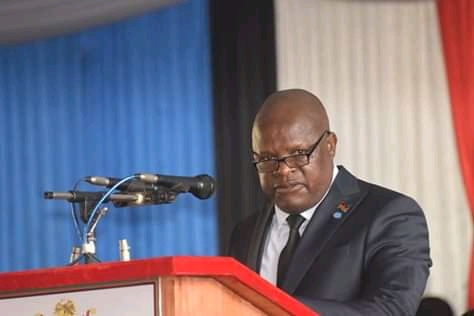 Vice President, Everton Chimulirenji on Wednesday said no country can develop without skilled labour force; hence, advised people in the country to have vision and remain focused.

Speaking during Reverend John Chilembwe’s Memorial Service of Worship at Providence Industrial Mission (PIM) in Chiradzulu, Chimulirenji said Chilembwe established PIM in 1900 knowing that the skills that would be learnt would help in the development of the country.

“We describe Chilembwe as a hardworking, a man of integrity and patriotic who wished his country well and wanted people to work hard in their fields instead of waging wars that coukd not bring development,” he said.

Chimulirenji urged parents to train their children to be hardworking and patriotic and that their integrity as children should not be lost by taking part in demonstrations that are destroying various public infrastructures.

He asked the gathering to emulate the example of Jesus Christ who always preached peace, saying people should go and preach the same so that the country can attain meaningful development.

He said the theme for the prayer service was deliberate, urging all Malawians to strive for peace and unity. The worship was held under the theme: Blessed are the peace makers.

Minister of Youth, Sports and Culture, Francis Phiso said Chilembwe loved his country by engaging the youth and women in skills development.

“The freedom we obtained in 1964 was initiated by Chilembwe, but now we are afraid with the demonstrations that are happening in the country as children are also getting involved in them,” Phiso lamented.

In his sermon, President of African Baptist Assembly, Wilson Mitambo advised the gathering to go home and observe peace and wait patiently for the presidential case results currently in court.

Mitambo who is also PIM President advised the congregation not to be misled by people with ill minds when the presidential election case results are out, but listen to God on what to do, saying blessed are the peacemakers.

John Chilembwe was born in June, 1871 and established PIM on December 12, 1900 at Mbombwe in Chiradzulu and his first message was that Africa is for black people which did not go well with the whites.

Chilembwe died on June 15, 1915 and currently PIM churches are found in the six countries of Malawi, Zimbabwe, Zambia, Mozambique, South Africa and the Democratic Republic of Congo.