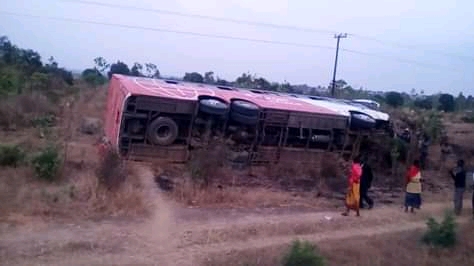 Malawi Posts Corporation (MPC) has confirmed that one person has died while others have sustained injuries when one of its buses overturned at Nkhamenya in Kasungu today.

According to a statement issued by MPC, the bus had 26 passengers and 2 crew members on board.

“It is with great sadness that the Malawi Posts Corporation Board, Management and Staff informs the general public of an accident that has occurred in the early hours of Saturday 2nd November, 2019,”

“Details are that, Post bus registration number BW 7919 travelling from Blantyre to Mzuzu which had 26 passengers and crew members on board overturned at Nkhamenya in Kasungu,” reads a statement.

The statement further reads that an immigration officer from Mzuzu has died on the spot while others have sustained injuries.

“We have regrettably lost one of our passengers , Mr Hosea Mologera ,an immigration Officer from Mzuzu would died on the spot and three have sustained serious injuries while 14 others have minor injuries,” reads a statement.

MPC has condoled the bereaved family for the loss and promised to assist all the affected passengers.