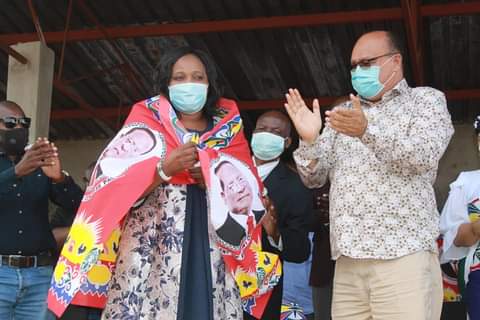 Mia made the remarks recently when welcoming MP for Nsanje South Ramzan Juma Mohammad into the party.

According to Mia who is also the Minister of Transport and Public Works in the Tonse Alliance Government, the opposition MPs joining MCP are making a wise decision.

“I am at the far end of our country, on that very last chunk we see on our country’s map in Nsanje, welcoming Honorable Ramzan Juma Mohammed—Member of Parliament for Nsanje South—who has made a wise decision to join Malawi Congress Party (MCP)”

“Yesterday, I welcomed Honorable Eurita Mtiza, Member of Parliament for Nsanje South West at Nsanje Youth Centre, who made an equally wise decision to join the mighty Malawi Congress Party,” he says.

“The trio cited visionary and transformative leadership of State President Dr Lazarus Chakwera as the main reason why they decided to join the rebranded mother of all political parties in the country—MCP. They see Dr Lazarus Chakwera led administration as a trusted partner in improving the lives of their constituents as opposed to working with opposition elements. I find this reasoning compelling,”

“I told them that President Dr. Lazarus Chakwera is delighted to have found new allies who will help him clear the rubble so we can build a new Malawi together,” he says.