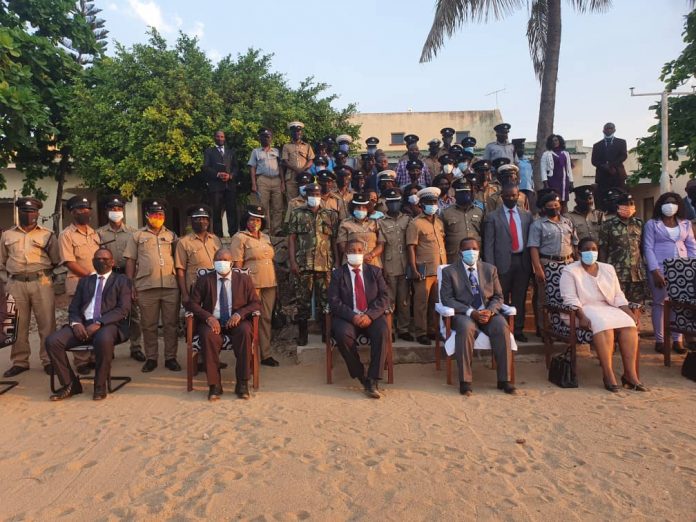 The inspector general of police George Kainja and his high command team that comprises of eight commissioners and one deputy commissioner, for the first time in police history lectured Mangochi and Monkey bay police stations officers.

The meeting occurred on September 11, 2020 at at Makokola Police Cottage in the district.

Speaking to officers, the police chief said that he has observed that many junior officers don’t know their commissioners and vice versa hence he took an advantage of the presence of high command team in the district to interact and know Mangochi police officers and vice versa.

Mangochi Police Station Public Relations Officer Rodrick Maida told Malawi Muslim Website that Kainja unveiled his vision of bringing police back to its basics by making sure discipline is observed at all cost by police officers in order to recover the lost glory.

“He also cited the national bi annual report that indicates that crime has increased by 19% as a signal that we are not doing fine hence a need to come together as one family and strategize in order to find ways and means of reducing crime,”

“He also encourages proactive way of policing as a tool for fighting crime since policing is a social work and not a military work,” Maida says.

According to Maida, the inspector general warned officers to desist from corruption and anyone doing so will face the long arm of the law.

“Lastly he asked managers to include at least 40% female police officers representation in decision making,”

“Then the officer in charge Mangochi police station Francis Chisoti senior assistant commissioner of police thanked the inspector general for organising the meeting which he described it as extra ordinary,” Maida says.

Kainja was vetted two days ago by Members of Parliament (MPs) as Malawi Police Inspector General.