In our last article, we examined the accountability and responsibility of politicians towards Malawian Muslims. Our analysis showed that the system for the last 20 years since multiparty democracy has failed to hold politicians accountable to Malawian Muslims, despite helping in putting them into power. Usually the practice has been for politicians to shun their Muslim constituents soon after elections.

Some have even gone to castigate Muslims publicly, with one former MP (name withheld) calling them ‘al qaedah’ or something to that effect in parliament, yet the MP was representing a constituency that has more than 99% Muslims. The same MP went on to ridicule a fellow MP who happened to be a Muslim to go and make his contributions “ku mzikiti” and not in parliament. Some Muslim politicians are well known of passing remarks such as “am not an MP for Muslims”, yet before elections, they jostle for publicity in mosques masquerading as champions of the Islamic cause in Malawi. Thus we can see that there is immense lack of accountability and responsibility once Muslims have helped put politicians in power and the system is not robust enough to flush out such macabre behaviour.

The equation of accountability and responsibility is never complete without the balancing factor of transparency. Generic but critical questions that we must ask are: what is wrong with having a transparent, clean and fair government that represents all without discrimination? Isn’t this what every Malawian would want, with the Muslims not being the odd one out ? Isn’t this the moral code of every political system world over? What do we learn from the many anecdotes of governments coming to power, through both democratic and authoritarian means, only to discover that the previous administration had lied about the condition of its economic systems or discriminated against one section of the community?

The conundrum for citizens is then to decide which actors are telling the truth, those who are truly guided by long term principles of the need to uplift a community rather than short term political gains of deceit. How do we prepare for the inevitable then, the General Election, which comes every five years and the same politicians will be looking for our votes? How do we as a Malawian Muslim community separate the wheat from the chuff, the “usipa” from the “bonya”? Transparency is the key to answering these questions.  But what exactly is transparency?

According to Vishwanath and Kaufmann (1999), transparency is the “increased flow of timely and reliable economic, social and political information, which is accessible to all relevant stakeholders.” Thus transparency is a tool that facilitates the evaluation of public institutions with the information provided accounting performance.

Simply put, a transparent political system is one that provides accurate information about itself, its operations, and the country as a whole, or permits that information to be collected and made available to those who require it. This definition goes hand in hand with an Islamic transparency.

Islam stresses on transparency and justice not only for Muslims but also for all religions and races. Islam promotes justice for all; Islam promotes honesty and Islam promotes a clean and fair government. For instance Caliph Abubakr (R.A), had transparency high on his leadership agenda. This was at a very crucial time since the Ummah had just lost the holy prophet Muhammad (SAW). Thus the Caliph in his inaugural speech reiterated the notion of transparency in its entirety as he is reported to have said:

“I have been given the authority over you, and I am not the best of you. If I do well, help me; and if I do wrong, set me right. Sincere regard for truth is loyalty and disregard for truth is treachery. The weak amongst you shall be strong with me until I have secured his rights, if God wills; and the strong amongst you shall be weak with me until I have wrested from him the rights of others, if God wills. Obey me so long as I obey God and His Messenger. But if I disobey God and His Messenger, ye owe me no obedience. Arise for your prayer, God have mercy upon you.

More importantly, the Prophet (SAW) was asked to declare that: “I have been commanded to maintain justice between you” (Al Shura, 42:15).

These quotations show an overriding concern for justice in all its dimensions: legal, political, social, economic and international. Also, all the personal, civil, political, social, cultural and economic rights of an individual are guaranteed. All people have equal rights and each and everyone is equally responsible before the law and within the system. It is the obligation of the rulers to ensure that each member of the society particularly the weak, is given his due rights while the powerful are made to fulfil their commitments. Transparency is inherently intertwined in all this, without which a whole community can be deceived or even led astray. It is key in enforcing and achieving these tenets.

Just as the Caliph Abubakr (RA) retorted to the Swahabas, no Politician or leader must be obeyed if he or she has betrayed the cause of the Muslims. The Muslim community must demand openness from politicians and their leaders as this is their right under both Islamic law and rules of natural justice and those of Malawi.

Gone should be the days when the Malawian Muslims were used as stepping stones to sending individuals to Capital Hill only for those individuals to hibernate and resurface towards the next election. Muslims are not second class citizens in this country and they must be represented in all arms of governance and fairly represented. After 2014 insha Allah, politicians will be accountable, responsible and transparent toward the Muslim community. May Allah Bless mother Malawi and guide this beautiful nation of ours! 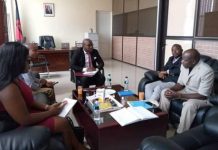