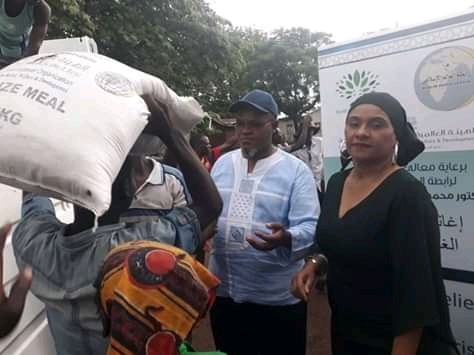 The efforts of an International organisation called Muslim World League (MWL) to see a hunger free Malawi can not be underestimated.

As Malawians are going through shortage of food, the international Islamic organisation is spending sleepless nights distributing bags of maize.

Recently , the organisation bailed out 2000 families in Saopa and Ngabu areas in Chiradzulu district.

Abida Mia is Member of Parliament (MP) for the area and she hailed the organisation for feeding her constituents.

The organisation also donated 1000 bags of maize to the people of Lilongwe South.

Traditional Authority (TA) Masambankhumba of the area also hailed the Islamic organisation for the support.

TA Masambankhumba said the aid retained a smile on the people who were lacking food.

The initial MVAC report indicated that 1,060,000 people were at risk of being food insecure.

Its goal is to clarify the true message of Islam.

It is engaged in propagating the religion of Islam, elucidating its principles and tenets, refuting suspicious and false allegations made against the religion.

The League also strives to persuade people to abide by the commandments of their Lord, and to keep away from prohibited deeds.

The League also helps Muslims solve problems facing them anywhere in the world, and carry out their projects in the sphere of Da’wah, education and culture.