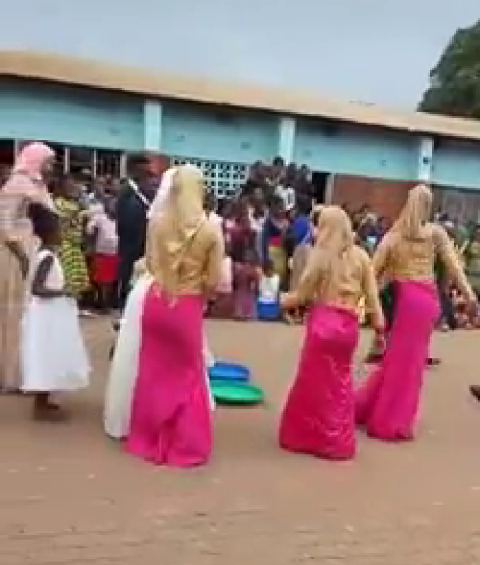 We investigate what actually happened at a nikkah which brought anger and mixed reactions in the Muslim community.

According to our Lilongwe based reporter Abdulsalaam Faduweck, the bridegroom is indeed a Muslim and comes from a pure Muslim background. However, the bride’s father is a Muslim who is currently staying in South Africa while her mother is a Christian of Baptist church.

The two already have a daughter of three years which they had before Nikkah. They have been in cohabitation since the pregnancy. During this time, our reporter says that the woman followed the man to Islam from Assemblies Of God.

Being a non Muslim, the chair lady thought it wise to approach another Muslim sister to help her on issues of bridal party i.e clothes and rehearsals so that it is done according to Islamic way. She did this, as our reporter established, after she saw that some members from the committee (who were Muslims) were slow and the time was running out.

The approached Muslim sister agreed to help by providing the bridal party with clothes and rehearsals.

The bridal party comprised of eight members. Four boys and four girls. Among the eight, there were only three Muslims — one male and two females.

The girl and the boy who created the scene are both Non Muslims.

According to the findings, the Muslim sister who agreed to help on the bridal party, provided Islamic clothes and the rehearsals as asked. To her, the rehearsals and clothes were Islamic and she said whatever happened after that, is none of her business because it was out of her control.

But why the Muslim members who were in the bridal party did not resist doing what was captured on the video, being Muslims?

“The Master of Ceremony [who is not a Muslim] ordered everyone in the bridal party to faint to the lyrics of the song. She said those who would defy her orders had to pay Two Thousand Kwacha as a penalty of which we could not afford,” a girl from the bridal party, Hameedah Benard tells our reporter.

The song is by a South African singer King Monada. He sings about developing fainting spells when his lover cheats, does not give him money and eventually breaks up with him.

Thrilled by the lyrics, the song led to what came to be known as the #IdibalaChallenge (fainting challenge) in which people have been taking videos of themselves simulating a fainting spell.

In the videos, the people would be singing along to the song, but when it comes to the part that talks about fainting, they would fall in a heap on the floor as if they had just fainted.

Still, how did they reach to an agreement of playing secular music at an Islamic wedding when the bride had already reverted to Islam?

“I heard that during the committee meeting it was agreed that at the reception they should play both Islamic and secular music [50/50],” says Malawi Muslims Website’s Faduweck.

Meanwhile, the bride’s uncle, Alfred Justin Mbewe has apologized to the entire Muslim community. Mr Mbewe however said the blame is for both sides because there is no way they could allow a Christian to lead an Islamic activity in this case, nikkah.

The chair lady of the committee Mrs Kamowa concurred with Mr Mbewe, admitting that it was indeed wrong for her to lead the Islamic ceremony whose rules are contrary to her religious practices.

She however said, at least she tried her part by involving someone who is a Muslim for guidance.