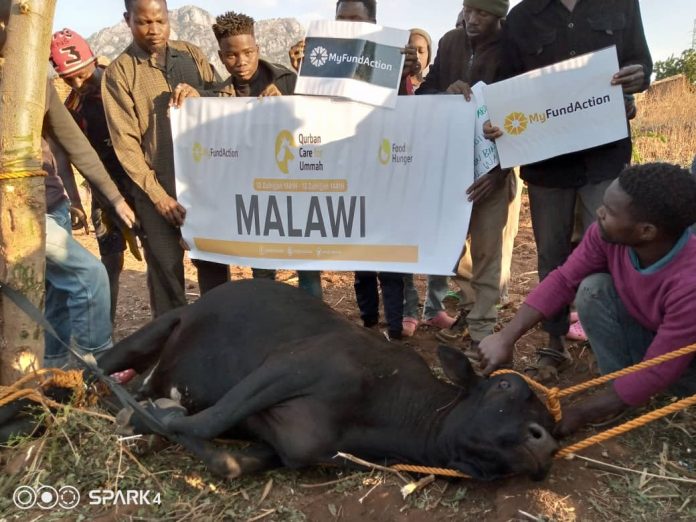 The Association of Al-Azhar Graduates in Malawi (AAGM), with help from MyfundAction, a Malaysian based relief organization, ceremoniously embarked on a three-day task of identifying very deserving rural and remote poor muslim communities to distribute Qurbani meat during this year’s Eid-al-Adha program which ran from the 10th to 12th of Zhul- Hijja 1441 AH, which corresponds to 31st July to 2nd August 2020.

The Association invested great efforts in making sure that poor Muslim families that are in very remote areas and almost left out in many programs that cities and townships enjoy, had the privilege of joining the rest of the world in commemorating this year’s Eid-al-Adha while having enough meat in their plates and eventually putting smiles on their faces and joy in their hearts.

In his remarks at each distribution location, the Chairman of the Association, Sheikh Qullab Jim who is also the representative of MyfundAction in Malawi, stressed the importance of reaching out to as many distant needy Muslim communities as possible. He also called upon all able Muslims to take a lead in helping the less privileged Muslims and coming together to serve in unity of purpose.

“Each and every Eid, whether Eid-al-Fitr or Eid-al-Adha, is meant to be a cause for celebration and rejoicing for each and every Muslim, male or female, rich or poor, wherever they are, city or village. All Muslims of all backgrounds. It is unfortunate that most privileges in regards to Assistance of any kind, in this case Qurbani meat, are mostly enjoyed by those staying in cities and towns that are easily accessed. For this reason, I took it as challenge to take the Qurbani meat sacrificed and donated by MyfundAction to those areas that desperately need this assistance. I strongly advice the others to do the same,” Sheikh Qullab Jim said.

On a separate note, the Chairman applauded the management of MyfundAction for considering Malawi as a target for this year’s Qurbani distribution.

“If not for the great efforts and assistance from MyfundAction, an organization aimed at uplifting the Muslim ummah welfares, I would not be standing here distributing the Qurbani meat this year. I, on behalf of the Association of Al-Azhar Graduates in Malawi wholeheartedly thank the management of MyfundAction for enabling us to bring this Qurbani meat to those deserving. I ask Allah the Almighty to bless them and everyone who made a contribution in this gracious act. May Allah accept the sacrifices and reward those who sacrificed accordingly In Shaa Allah,” he said.

In response, the beneficiaries of the program expressed their overwhelming joy and gratefulness over this gesture. They felt remembered and counted as most programs don’t reach them due to the remoteness of their communities.

“We are very happy that this year we have a privilege to call this Eid-al-Adha as it is, having meat at hand. For years, we just pray the Eid swalat and eat okra or other vegetables. But this is different. We are especially happy that you have come here which means you know that we exist here and that you will continue to come and count us in everything you do,” said the representative of one of the benefiting villages.