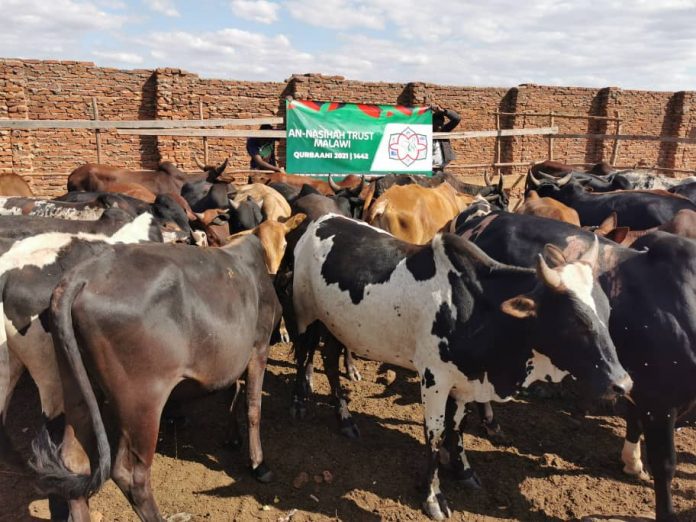 AN-Nasihah Trust has celebrated Eid-Adha by reaching to 70 villages with Qur’baan Programme after fasting in the first Ten days of Dhul-Hijjah.

Speaking in an interview with Malawi Muslims Official Website, the Founder of An-Nasihah Trust Maulana Muhammad Choonara says the programme in 2021 has benefited 70 villages in Lilongwe Rural West.

“The AN-Nasihah Trust Qur’baan Project helps bring meat to the food tables of many desperately poor and needy homes in Malawi. It is easy to forget that many people is a rare luxury and that they only eat meat once a year because of this project,” he says.

Maulana Muhammad Choonara says AN-Nasihah Trust Qur’baan Project comprises of slaughtering, skinning and distributing of the animals. The trust has commended every person who has made the programme possible in 2021.

“May we take this opportunity to say Jazakumullah to one and all who entrusted us to carry out their Qurbaani and bring a smile to those in need here in Malawi,” Maulana Choonara says.

The day of Eid-ul-Adha falls on the tenth day in the final (twelfth) month of the Islamic Lunar Calendar; Dhu-al-Hijjah. The day that celebrations fall on is dependent on a legitimate sighting of the moon, following the completion of the annual Holy Pilgrimage of Hajj – which is an obligation for all Muslim’s who fit specific criteria, one of the important five pillars of Islam.

The celebration of Eid-ul-Adha is to commemorate Prophet Ibrahim’s devotion to Allah SWT and his readiness to sacrifice his son, Ismail. At the very point of sacrifice, Allah SWT replaced Ismail with a ram, which was to be slaughtered in place of his son. This command from Allah SWT was a test of Prophet Ibrahim’s willingness and commitment to obey his Lord’s command, without question. Therefore, Eid-ul-Adha means the festival of sacrifice.

Depending on the country, the celebrations of Eid-ul-Adha can last anywhere between two and four days. The act of Qurbani (sacrifice) is carried out following the Eid Salaah (Eid Prayers), which are performed in congregation at the nearest Mosque on the morning of Eid.