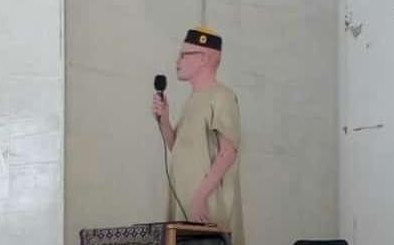 Overstone Mkwapatira Kondowe who until the 6th October 2021 was Special Presidential Advisor to President Dr. Lazarus McCarthy Chakwera, has thanked the President for raising the bar so high in the history of Malawi and the whole world that it will take ages for someone to reach.

Kondowe said President Dr. Chakwera has shown to the world that persons with albinism are capable too to achieve in life if given the opportunity praying to God to continue giving him wisdom, knowledge, and understanding to sail this ship to the greatest success.

This is contained in a resignation letter to the Office of the President and Cabinet (OPC) that Kondowe has resigned from his position as Special Advisor on Persons with Albinism and Disability with effect from 6th October 2021 in compliance with section 40 of Parliamentary and Presidential Elections Act (PPE).

Kondowe has resigned from his position to contests for Nkhotakota North East Constituency as a Member of Parliament in the by-elections slated for 26th October 2021, the constituency fell vacant in the National Assembly after the death of Martha Lunji Chanjo.

If elected, Overstone Kondowe will be the first person with albinism to be a Member of Parliament (MP) in the country and perhaps the whole SADC Region and his election will contribute to the fight against abduction, and killings of persons with albinism.

Speaking in an interview with one of the leading daily papers in Malawi, Kondowe said the participation of Persons with Albinisms [PWA] in political, public, and social life is crucial to fighting existing stereotypes, prejudices, and segregation saying their exclusion from decision-making processes creates not only more divided and potentially less peaceful societies but also significantly weakens their opportunities to defend their own interests.

Kondowe said he will be ensuring that Persons with Albinism take part in an active role in the political and public life of their societies saying this will be contributing both to stronger respect for their rights and to more albinism-mainstreamed legal and policy frameworks that better reflect the needs of all community members.

He said issues of Persons with Albinisms are not only attacks, abductions, and killings, there are also health, education, economic, social, and political concerns that need to be addressed holistically saying if the country focus on attacks and killings only, then it is losing the fight of promoting the human rights of PWAs in Malawi and SADC Region.

“If I win as a Member of Parliament, it will be of great achievement in the albinism fraternity and in the country as a whole, I will put Malawi in the limelight in the SADC Region,” said Kondowe.