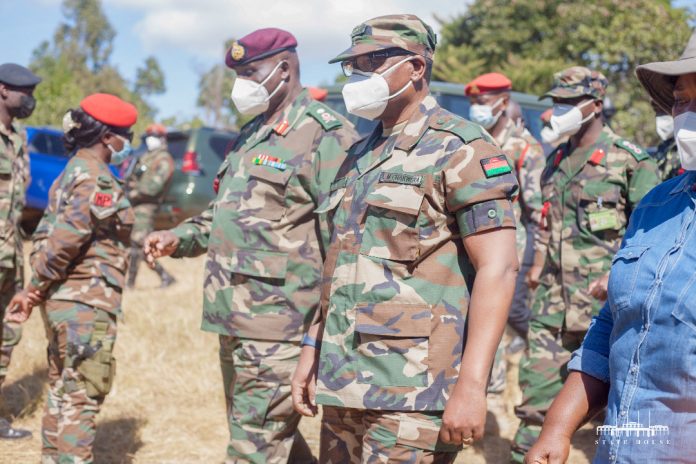 President Dr. Lazarus McCarthy Chakwera, in his capacity as Commander in Chief of the armed forces in Malawi on Thursday, 4th June, 2021, visited and inspected Luwawa forest reserve in Mzimba to appreciate the trainings the men and women in uniform as part of their job to defend the sovereignty of the country.

Interestingly, being the first president in the country’s history to visit military trainings in the bush, he dressed in full camouflage resembling the Army Generals with a name tag L.M. Chakwera attached on his top gear.

The dressing in military regalia has become the talk of the town with others thinking that President Dr. Chakwera has a motive of militarizing Malawi, hence a visit to inspect military trainings in the bush, a development which is not true.

Muvi wa Chilungamo has commended President Dr. Chakwera for visiting the soldiers while in the bush describing his visit as not strange that soldiers are his people and he is there Commander in Chief hence he must be close to them to hear their grievances and concerns and bring in immediate solutions.

Its Commander in Chief, Bantu Saunders Jumah, is advising Malawians not to be scared of nothing and that they should not be afraid of their own shadows saying it happens in many countries that when the President is addressing soldiers, he must dress in military regalia.

Jumah said President Cyril Ramaphosa of South Africa when he was announcing new lock down Covid-19 3rd wave measures to the South African soldiers, he went to the Barracks dressing himself in military regalia symbolizing that he is part of them and found no wrong doing for Chakwera to be in MDF uniform.
He is urging President Dr. Chakwera that after appreciating military trainings, he has to visit the hostels and houses where these soldiers are living saying there is where he will see many sufferings the soldiers are going through besides of being accorded with honor of decorations,”the most discipline Army in Africa”.

“Let the President visit where these soldiers are living, he will see shacks not houses for men and women in uniform, for 27 years of independence, the country has failed to build no good houses for its soldiers, very shame to the leaders for lacking patriotism,’’lamented Jumah.

After visiting and inspecting military trainings of about 1,390 soldiers who will graduate and be posted to different Army units across the Country, President Dr. Chakwera urged Malawians to trust and give support to their soldiers for good professionalism.