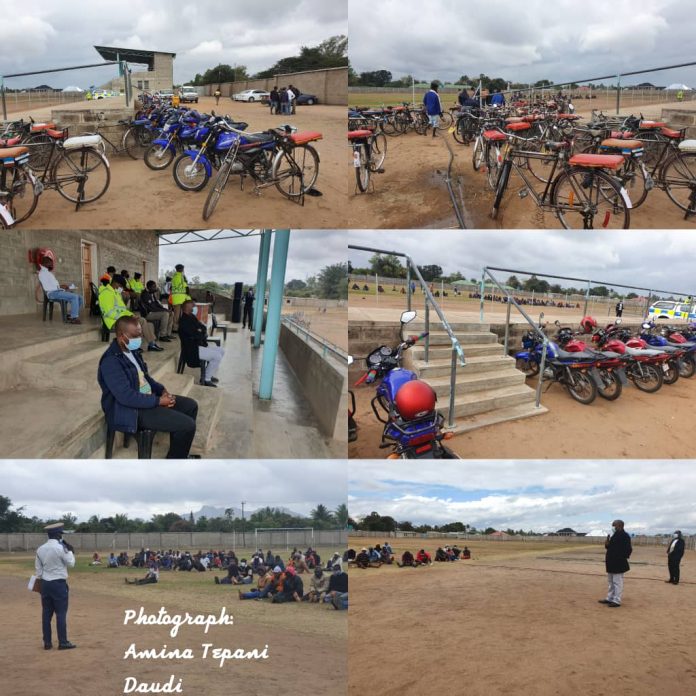 Police in the Eastern Region in conjunction with the departments of Malawi Revenue Authority and Road Traffic Directorate and Safety Services have intensified efforts towards motor cycle registration and license processing to kabaza operators.

The call was made on Monday July 26, 2021 at Mangochi Stadium during sensitization awareness where Kabaza pedal and motorcyclists in the district attended.

Eastern Regional Traffic Inspector(RTI), Superintendent Esther Thodi reminded the operators to make use of the six month(July-December) period consideration which has been given to them by the government to register and acquire a license.

Among others Thodi urged the operators to adhere to traffic regulations such as wearing of crush helmet, carrying capacity, licences, reporting of road accidents and taking of victims to the hospitals.

Speaking to the Kabaza operators, Edwin Chikamba from the Directorate of Road Traffic and Safety services in Zomba elaborated on the motorcycle registration and rider’s licence processing.

He encouraged them to register their motorcycles at road traffic offices which has a branch in Mangochi.

Chikamba also expressed his worries over an increase of road accidents in the region of which most of them are contributed by Kabaza operators due to negligent riding.

He included that, according to their statistics from January this year up to date 94 people have already lost their lives in the entire region compared to 66 people same period last year.

On his part, Orton Banda Liwonde MRA Station manager elaborated to the Kabaza operators how the revenues are used in the country and the importance of paying tax.

Banda warned them to desist from buying or using motorcycles which are not duty paid.

The Kabaza operators were also asked to stop the tendency of operating their businesses during odd hours to avoid being robbed or killed.