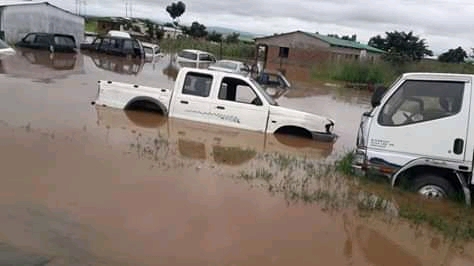 One of the residents of the area , Linda Chisisili told Malawi Muslim Website that the rains hit the area causing floods that submerged houses and cars among others.

The victims are seeking shelter in churches,schools and some houses.

Recently, the Department of Climate Change and Meteorological Services in the Ministry of Natural Resources, Energy and Mining issued a weather warning that heavy rainfall associated with strong winds, lightning and thunder , is expected across the country.

The Department said the heavy rainfall is due to Inter-Tropical Convergence Zone and the presence of a deep low pressure all over central areas of Malawi .

The warning was contained in a statement issued by the Director of the Department, Jolamu Nkhokwe.

In the statement, the Department said the anticipated heavy rains are likely to trigger flash floods, particularly those areas that are flood prone and low lying in the south, centre and lakeshore, as soils are already wet in most areas of the country with strong winds, lightning could destroy property, cause injury and loss of life.

The statement said in order to secure property and lives, the public should take precautionary measures such as moving to higher ground when water levels have started rising, avoid crossing flooding rivers and not seeking shelter under trees and weak infrastructure.

The Department of Climate Change and Meteorological services is closely monitoring atmospheric system that influence weather developments in the country and will continue to issue updates to ensure that the public is kept from any weather related threats.