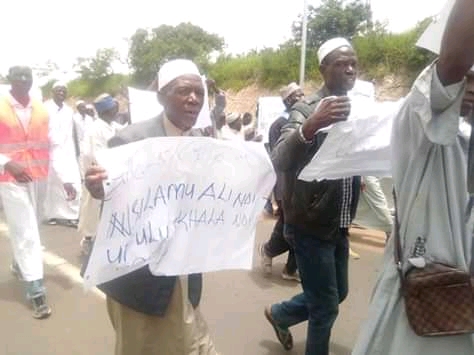 Some Muslims in the district demonstrated forcing government to arrest people who murdered a Muslim police officer during Human Rights Defenders Coalition (HRDC) demonstrations in Msundwe in October, 2019.

Reacting to the development, one Muslim has said it is proper to follow better methods when addressing such issues than going on the streets.

“Do not mix blind politics with Islam. I am not happy with the loss of our beloved brother even though there is no soul that demises except in the exact time. That is our belief. What I condemn is the act of believing in a bad habit like that of following the footsteps of Kuffar,”

“We can present our petition in a good way so that Allah is going to be pleased with our obedience. Demos has no room in Islam except when a Kaafir resist you from worshiping Allah alone. Preserve your Manhaj otherwise demos falls under the Shiites’s doctrine and this contradicts our aqeeda. May Allah guide us,” one Muslim said.

The Muslim Supreme Council of Malawi led by its Chairperson Sheikh Yasin Katungwe has presented a petition to Machinga District Commissioner Rosemary Nawasha. In the petition, the Muslim organisation is asking government to arrest people who murdered the police officer, late Usumani Imedi from Mangochi district.