by Bright Malenga
in Featured, Sports
Reading Time: 2 mins read
A A
0
0
SHARES
135
VIEWS
Share on FacebookShare on TwitterShare on Whatsapp

… produces goalkeeper and top scorer of the tournament…

A 3 to 0 comfortable win over Kenyan students saw Malawi female students at International University of Africa (IUA) crowned the champions of the football tournament organised by Ambassador of Kenya in Khartoum, Sudan.

Director of Sports and Culture for Malawi students at IUA Lekeleni R Akimu told Malawi Muslim Website that it was not easy to win the medals.

“The final was not easy for us. The first half ended goalless. Fortunately, in the second half our striker Ellina Kutchemba scored two goals and Hawa Shuwad scored one to be crowded the champions,” she said. 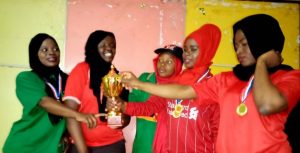 “The best goalkeeper of the tournament comes from Malawi and it is me. I have my own special medal for that, ”

She told Malawi Muslim Website that good communication with the players made her to win the special accolade.

“I was trying to communicate with my teammates. Whenever I saw an opponent alone ,I never stayed quite. I was always reminding the players what they were supposed to do,” she said.

They played their first match with Ghanaian students which at first played with Nigerian students and the game ended in a draw.

Later, they played with Nigerian students and registered a draw again.

Because Nigerian students had no point and Malawi students had one, it gave them an opportunity to proceed to the semifinals.

In the semifinals, they beat Gambia 4 goals to 0 to book a ticket to the final.

Minister of Water and Sanitation, Honorable Abida Sidik Mia says her ministry is committed to provide clean water and improved...