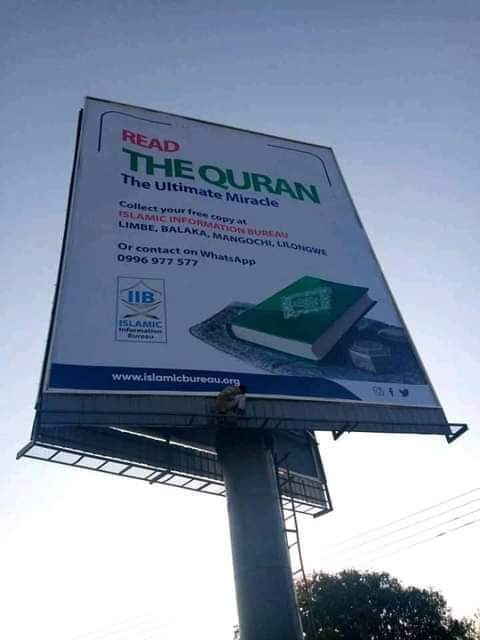 Muslims in the country are not happy with the decision of Islamic Information Bureau (IIB) of allowing Blantyre City Council (BCC) to change the message which was on the billboard erected at Maselema in Blantyre.

The controversy sparked when BCC had restored the billboard but with a slightly altered message.

“What we want is the billboard in its original form,”

“IIB was not supposed to change the wording of the billboard. This change is technically an acceptance that the first one was indeed wrong”, says Dr Yusuf Aufi.

Imran S. Matola says,” Who was consulted that they want to change the Wording?”

“Let them restore the original billboard and it is up to the one who erected the first one to make alterations or not”, says Joseph Chidwala.

“I can not comment on the matter as of now,” he said in an interview.

In his remarks, MAM spokesperson Sheikh Dinala Chabulika says he doesn’t see anything wrong with the altered message because it serves same purpose.

“The main Aim of the Message was to ask people to read Qur’an which is exactly the same thing with the new message. If it has been that the BCC refused to restore the billboard in its entirety, then as MAM we would still have issues”.

Otherwise, if we keep on making noise people will now think like we had other issues and that we have just taken advantage of the billboard saga”he said.

The restoration of the billboard comes in a time when The Ministry of Civic Education and National Unity wrote a letter to blantyre city Council to apologise over a billboard saga.

The billboard was erected by Islamic Information Bureau and later it was removed by the Blantyre City Council after Dr Zacc Kawalala of Evangelical Association of Malawi said the billboard was carrying offensive message.