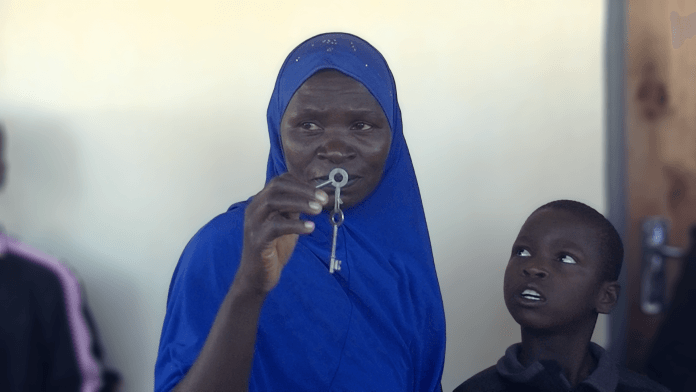 Having a child is one of the best moments in everyone’s life and giving birth to twins means your joy is doubled. But imagine a situation where you have up to five children, all declared normal by medical experts but later to find out that is not the case? They are all physically challenged.
Would your joy continue or you start questioning your faith? Well, some may be frustrated but a true Muslim who believes that everything happens for a reason will not question his/her imaan.
That is the story of a 42-year old Mr. Omar Green Chisale Sani of T/A Nkowola in Machinga District, the Southern part of Malawi whose family yesterday received a modern three-bedroom house and a grocery shop.

Mr. Sani and his wife gave birth to their twins in 2007. All girls. The doctors checked the twins and declared them medically okay. The family came back home wearing happy faces —yes of course, just like anyone would do. Little did they know the test Allah prepared for them.

Two weeks later, Mr. Sani noticed something strange in his children. The children started shivering and showing some unusual gestures. He took them back to the hospital where the doctors checked them and said there was nothing big — they would be okay.

Mr. Sani went back home and still, nothing changed. He visited other hospitals, MACOHA, and other places to look for help but to no avail. That was the beginning of the disability of all his lovely daughters. The children are deaf, dumb, and can’t walk. Mr. Sani was frustrated but he kept faith in Allah.

“It was a very trying moment for our family. I couldn’t, and in fact up to now, can’t believe what happened. The fact that the doctors at first declared them okay and we could see it ourselves — it’s what shocked me,” he narrates his story to the Malawi Muslims Official Website.

A few years later, the family gave birth to another child. “It’s a baby boy!” The nurses told them. As usual, the doctors made their tests and declared the child medically fit — they were discharged.

As the child grew, again the family noticed something strange. This time around, he could walk but couldn’t hear and struggled to speak. Mr. Sani took the child to the hospital but again he was told it was nothing big — the boy would be okay. But they were wrong. The child is deaf and dumb.

“I couldn’t believe it. I was so heartbroken,” he says.

“But it is Allah’s wish so we couldn’t do anything,” continued Mr. Sani.

If this was not enough, the problem continued with other two more children — a boy and a girl who all happens to be deaf and dumb.

This means Mr. Sani has got 5 children with different disabilities out of 7. This is a huge responsibility for him.

Nevertheless, Mr. Sani is a very hardworking, caring, and loving man. He never runs away from his responsibilities and he has always been trying to feed his family. Unfortunately, Mr. Sani couldn’t go out to look for food anymore as he used to do. The children wanted to be with him always. The moment he steps the foot out of his house, the children start crying uncontrollably which forces his wife to call him back. He can’t do anything but be back and stay with his family.

However, this meant that the family lacked basic necessities like food and proper shelter. He started pleading for help.

Some people in the area started helping Mr. Sani’s family but the Traditional Authority (T/A) of that area, T/A Nkowola saw that the assistance wasn’t enough.

Therefore, in September 2020, the T/A made a video clip about the family, appealing for support, and circulated it on social media. The clip highlighted the plight of the family and showed the dilapidated grass-thatched house in which they were living in.

The clip went viral and attracted many individuals and organisations within Malawi and across borders who started pouring their support.

One of the organizations is the Muslim Association of Malawi (MAM). The association’s National Chairman His Eminence Sheikh Idrissa Muhammad deployed his team to the area to assess the situation and immediately, the construction work of a modern three-bedroom house and a grocery shop began.

On Saturday, April 24, the association handed over the two structures to Mr. Asani during a high-level handover ceremony which took place at the headquarters of T/A Nkowola. The ceremony was graced by a Member of Parliament for the area, Mrs. Esther Jolobala, officials from Machinga District Council, Sheikhs, and several village headmen.

MAM executive member Alhajj Binton Ajawa who was the guest of honour, representing the national chairman said one of the MAM’s mandates is to help the government where there is a need. He said there are many things that the government can’t manage to do alone and requires external support from well-wishers.

“So, as a faith-based organisation, we saw the need to render our support. We know there are many things that require the government’s intervention but it can’t do it alone. It is our responsibility to come in and help wherever we can. This is why MAM always works with the government of the day,” said Ajawa.

In his remarks, T/A Nkowola applauded MAM for the gesture, saying he was very happy to see the family starting a new life in the “mansion”. He however advised the family to consider contraceptives so that they avoid adding other responsibilities.

“Of all the things, I mostly needed a house for this family and I am so happy that MAM has helped us. My humble appeal goes to the family that they should consider contraceptives so that they avoid adding more responsibilities. There are many families requiring similar help in my village therefore it won’t be fair that we should just be helping one person,” he said.

T/A Nkowola also asked well-wishers to consider building a fence saying since some children can’t walk, they are bathed at an open ground.

“So considering that the house is close to the road, it affects their privacy,” continued the T/A.

Both the MP and officials from District Council also praised MAM for the donation saying it will go a long way in helping the family that has been struggling for years.

According to MAM Spokesperson Sheikh Dinala Chabulika, both the house and the grocery shop have been constructed with funding from Kuwait.

Chabulika said there is nothing more important to a man than having peace of mind.

“You can see that the man has now much energy to speak because he knows that his family has a good place to sleep and knows where to find the next meal. As MAM, we are very happy to see that smile on his face,” he said.

Mr. Sani, while thanking MAM for the gesture, he had two or three more appeals to make.

“I don’t have much to say but Allah should reward abundantly everyone involved in this noble task. However, without looking as if I am ungrateful, I want my kids to go to a sign language school so that they can have a better future. Maybe they might find a job and be independent in the future — forgetting all these challenges. I have seen people with these kinds of disabilities working. I wish that for my children,” pleaded Mr. Sani.

Mr. Sani also said since some of the children are growing up, it is becoming a challenge for him when they fall sick.

“Putting them at the back when going to the nearby hospital, which is a bit far is a challenge. So, if possible, I am asking the well-wishers to help me with mobility,” he said.

A day before the handover ceremony, MAM also donated various items to the Mr. Sani family and other ten more families. The items included clothes, food, wheelchairs among others.

MAM also ordered some groceries for the shop and gave them to the family as a starter pack.