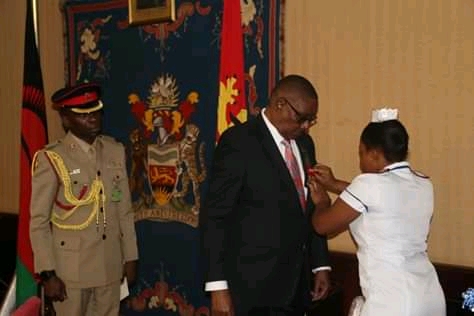 President Peter Mutharika has today launched poppy flower week as a way to celebrate those who sacrificed their lives for the sake of others at Kamuzu Palace in Malawi’s capital, Lilongwe.

During the launch, Mutharika has also bought one poppy flower at 1 million kwacha and asked Malawians to buy one and the money collected will support the veterans and Ex-Service League of Malawi (VELOM), an organisation that provides critical services to the retired and wounded personnel in the country.

“There is no greater sacrifice than to die for another human. A time of the year has come for us to share our resources with families of the fallen heroes and the living veterans who put their lives to the service of this country,”

“Today, we launch the Poppy Appeal as a special appeal to all Malawians to give and share with the dead and the living who have served this country in military service. The climax of our commemoration activities will take place on the remembrance day parade on Sunday, 10th November,” Mutharika says.

“I urge you all Malawians to buy the Poppy Flower as your modest contribution to the lives and families of the living and the dead who served this country. I have just bought my Poppy Flower at K1 million,”

“The Poppy Flower has since 1921 become a symbol of memories for those who died in the World War. The best honour we pay to the dead is to remember them. In Malawi, we also remember the veterans who have served this country. That is why my ministry has been renamed the Ministry of Defense and Veteran Affairs,” he says.

Mutharika urges Malawians that as they buy this poppy flower, they should take it as a special symbol and in special memories.

“As you buy this poppy flower, remember it takes the patriotism, the integrity, the hardwork and the sacrifice of our soldiers for us to have peace and stability in the country,”

“Many of us forget that it has taken the service and commitment of others for Malawi to have the peace and stability that we enjoy today,” he says.

The president says that Malawians should never forget where they are coming from as a country.

“This year, let us in our large numbers buy and proudly wear this poppy flower also a commemoration of peace and stability. If you love peace, and you wish this country peace-buy and wear the poppy flower,” he says.

Mutharika has reminded Malawians that the peace and stability they enjoy in this country comes from the sacrifice, dedication and patriotism of the security forces so they should be honored.

“I also know many high and junior ranking officers who serve this country for nothing but one goal. Their goal, and our goal is to ensure peace and stability in our Mother Malawi at all cos,”

“We will never, never have another Malawi.This is our sacred cause! This is the cause pioneered by our veterans and fallen heroes we remember and honour today. Fighting for peace and stability is the same sacred cause that takes us to peacekeeping missions around the world. And we want to be good peacekeepers abroad and at home,” he says.

The president says it is a national pride that Malawi Defence Force has demonstrated that it is highly disciplined and professional force.